Five years after the successful introduction of the first Bolt EV, Chevrolet introduced an updated version that looked like a completely new generation.

Chevrolet sold over 100.000 units from the Bolt EV in just five years before introducing the 2021 version. Even if it wasn't a new generation, it showed some differences that made it more appealing. Best of all, it was a lower price dropped about 15% when compared to its predecessor. Thus, it beat Tesla again in offering the most affordable electric car on the market.

The 2021 Bolt EV shape was the same. It looked like a mix between a hatchback and a minivan. Maybe it wasn't the best aesthetic solution, but it worked well for the bow-tie brand. The new model featured LED daytime running lights and headlamps, while its predecessor was available only with regular bulbs. Its new front fascia featured a blacked-out grille with the Chevy badge in the middle.

Inside, the 2021 Bolt EV featured a simple dashboard design with a 10.2" infotainment display placed in the middle. An 8" TFT screen filled the instrument cluster and made the analog dials obsolete. As an option, Chevrolet installed a safety system that measured the driver's fatigue and warned him to pull over and take a nap. It is understandable since the car rolled in silence for all the five passengers that could sit inside. In the back, the 60/40 split-folding bench was good to expand the trunk.

Under the hood, Chevrolet counted on the same electrical system as its predecessor. A 200 hp electric motor fed by a 65 kWh battery pack ensured a range of up to 259 miles (416 km) on a full charge. 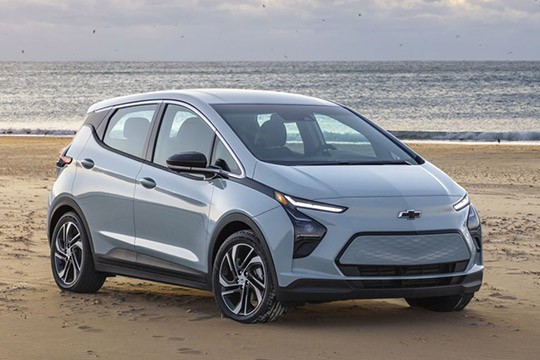