In 2016, Chevrolet introduced the Bolt EV and was the most affordable electric vehicle on the U.S. market and, in 2021, it introduced a bigger brother: the EUV.

GM maybe was not the first to start the electric car revolution. It surely had the Volt that lacked for its interior quality and high sticker price, but it didn't offer something to match Tesla. But the big automotive giant worked harder than Tesla and, we might say, smarter.

Thanks to its crossover style and proven technical platform, the Bolt EUV was one of the biggest surprises from the 2021 start. It was a handsome one, with a completely blacked-out grille and the bow-tie that took center stage. The designers left some openings on the lower side of the bumper to cool the electrical system. Its LED daytime running lights were positioned up above the front fenders. The headlamps sat lower than those and were also full LED. Just remember that the first Bolt was available exclusively with regular bulbs. From its sides, the high profile of the Bolt was part hatch-back and part SUV. A black triangle on the C-pilar induced the floating-roof design.

Inside, Chevrolet used its experience with regular cars to create a roomy cabin with a high-tech dashboard design where a 10.2" infotainment system took most of the center stack. An 8" digital display filled the instrument cluster. For seats, the EUV featured two bucket-seats at the front and a 60/40 split-folding bench in the rear.

The Bolt EUV name stood for Electric Utility Vehicle and used the same motor as the Bolt EV. Its 200 hp were fed by a 65 kWh lithium-ion battery pack that was able to charge completely in about seven hours from a 240 v power outlet. 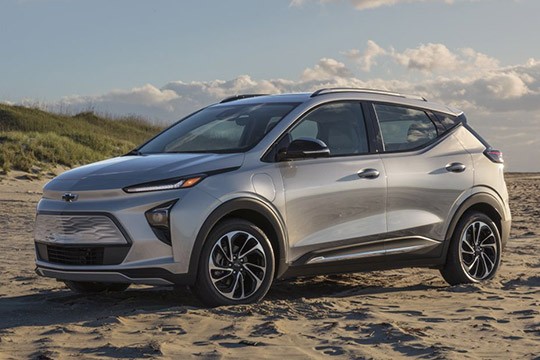