5 Caterham Turns the Seven Into a Kei Car, Gives It Tiny 660cc Engine

The Caterham bought the license for the nimble roadster Lotus 7 and started to make it with new engines and technologies. It started to do that in 1973 and in 2007 it introduced the Roadsport.

Caterham noticed that their customers cannot drive their cars on the road and the reason for that kind of car was to be on the roads, not in garages or exclusively on the track. So, it added the Roadsport version. A model that could handle better both the roads and the tracks.

With its long nose and the seats moved far back above the rear axle, the Caterham was a fine example of retro-classic design. The shape didn't change too much over the years. Just the materials used the engines and the seats. Since it started with Ford-sourced engines in 1973, it still had the same engine supplier, but with better units.

Inside the cockpit, there were two seats side-by-side for the occupants. There was no trunk or a room for luggage. Just two Recaro seats, a flat instrument panel, and a steering wheel. No doors and no doors either.

Under the long hood, there was a Ford Sigma engine with 1.6-liter displacement. It was offered with 125 or 140 hp respectively, the latter being used more for track days than for cruising. It was mated to a standard 6-speed gearbox. 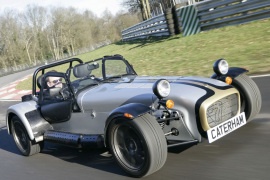