The 1953 Buick Roadmaster Skylark was a 50th anniversary model for the American brand.

It was more of a trim level for the Roadmaster and it evolved into a different lineup that lasted until 1988.

In 1953 Dwight Eisenhower was in the Office for a year and the Russian dictator Joseph Vissarionovich Stalin died. The American economy was released from the Korean war burden and people were happy on the streets. It was the right moment to celebrate the year with the new Buick Skylark. A car that traced its DNA from the Buick Roadmaster. By the way, the double-helix DNA construction was discovered in 1953 as well.

The big, rounded form of the Skylark was almost the same as the Roadmaster Convertible. But there were some differences. The chromed arch from its side and the big chromed “mouth” in the front were different on the Skylark version. It was lowered than the Roadmaster, with a cut on the doors to allow a comfortable position for the driver's elbow. The spare wheel was mounted outside the car, behind the trunk, under a special cover.

Inside, the Skylark featured almost all the features offered for the Roadmaster, except for the air-conditioning unit, which was considered unnecessary. The power-windows, the stereo with power-antenna, and the two-tone color interior were part of the exclusive model. It was way more expensive than a well-equipped Roadmaster.

Under the hood, the Skylark featured a 5.3-liter V8 that offered 200 hp. It was mated to a 3-speed automatic transmission and that was the only option for the drivetrain. In 1954, the Skylark was produced on a new chassis, from the Buick Century. But the real deal was the 50th anniversary 1953 model. 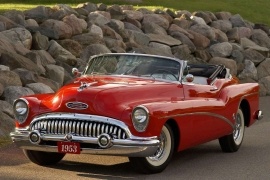 5 Buick Wildcat EV Concept Morphs Into CGI Production, Should It Be Called Regal?