BMW introduced the sixth generation of the M5 in 2017, and it was the first M5 available with an all-wheel-drive system.

It was available with the Competition package, and it was refreshed in 2020.

BMW introduced the strongest letter in the alphabet, the M, in 1977 with the mighty supercar BMW M1. After the introduction of the M3 – E30 in the mid-'80s, the German car-maker started a new era in automotive trend. The horsepower battle began for family sedans with the first M5 and it never stopped.

The Competition package took the M5 design to a different level with black styling on the grille surrounding. The door-mirrors caps and the rear spoiler featured the same color. The rear LED taillights received a new design and the twin-tailpipes featured thinner walls, for a better sound.

Inside, the M5 featured a complete digital display for the instrument cluster, and for the infotainment system, the latter sat on top of the center stack. The gear-selector was placed on the center console, surrounded by glossy-black trims. Since the car was built for high-speed driving and hard cornering, the front bucket seats supported the occupants due to the high bolstering.

The M5 Competition package squeezed 25 hp more from the regular M5 engine. It unleashed the 625 hp to all four wheels via an 8-speed automatic transmission. The traction system's different settings allowed the driver to send all the power to the rear wheels and disengage the dynamic traction control for drifting. And, if the 250 kph (155 mph) speed was not enough, the M Driver package option raised the bar to 305 kph (189 mph). 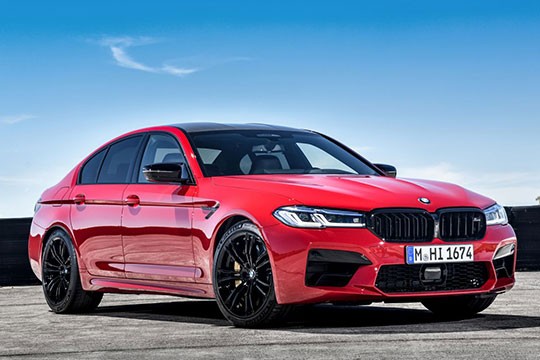