BMW introduced the first full-electric version of the X1 model, named it iX1 in 2022, and increased its presence on the EV market.

After trials and errors, BMW finally looked like it had learned how to do electric vehicles properly. But the carmaker knew that it needed more cars on the same platform to cover the development costs, so the iX1 shared many of its components with gasoline, diesel, hybrid, and plug-in hybrid models.

On the outside, the most significant changes made to the car to differentiate it from its IAC-powered cousins were the blue accents on various areas of the car located inside the side clusters on the lower bumper, the side sills, and the rear bumper. One important difference was on the grille that was completely shut. It looked more conventional than its bigger brother, the iX3. The car featured standard LED headlights or Adaptive LEDs as an option. At the back, the taillights sported the same L-shaped design pattern as the one found at the front.

Inside, BMW installed a screen in front of the driver for the instrument panel and a touch-screen atop the center stack for the iDrive infotainment unit based on the BMW Operating System 8. They were covered by the same curved glass, creating the so-called BMW Curved Display. The raised seating position allowed enough room for up to five passengers to comfortably sit inside the cabin.

But the most important difference between the iX1 and the rest of the X1 range was under the skin. BMW installed two electric motors that provided a total output of 230 kW (308 PS) and 494 Nm (364 lb-ft) of torque. The standard version came with an 11 kW AC charging port, while a 22 kW version was available as an option. 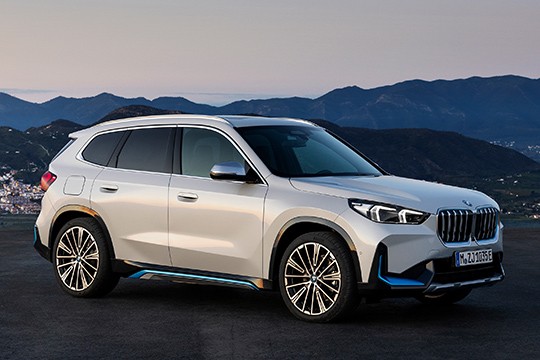