BMW refreshed the 8 series lineup in 2022, after four years since the car's initial launch in 2018.

It was a mild facelift for the car that revived a '90s nameplate in the German carmaker stable.

After BMW revived the 6 series in 2003 and used that name for two generations, it continued with the 8, resembling one of the greatest GT vehicles made by the Bavarian brand. With all the dots connected, the 2022 model came as its non-facelifted version in three flavors: coupe, convertible, and gran coupe (four doors).

The car came with the same elongated silhouette and a sloped roofline that emerged to the trunk lid for the coupe version. In addition, BMW offered an option for a carbon-fiber-reinforced plastic (CFRP) roof. A double-bubble design was also adopted, with a central indentation that crossed the car from the windscreen to the rear window. Starting with the 2022 model, all 8-Series models came fitted with an M-package, with a V-shaped center grille in the bumper flanked by two wide scoops that channeled the air to the front discs. On the sides, behind the wheel-wells, BMW installed extracting vents.

The classic dashboard layout with a rectangular instrument cluster and a driver-oriented center stack featured two digital displays: a TFT for the dials and gauges and a touch-screen for the infotainment unit. The tall center console separated the front seats, creating a single-seat sensation for the driver.

Under the hood, surprisingly, BMW still offered a turbodiesel version for its elegant and fast grand tourer. Yet, it enhanced it with a hybrid system to get lower CO2 emissions, in line with the 2022 requirements. Power went to the rear or both axles, depending on the version. 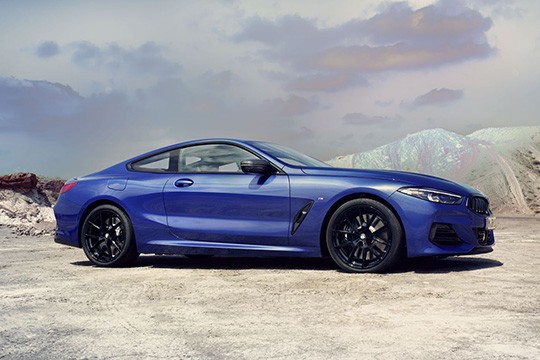