The first generation of the 3-Series was introduced in 1975 and came after the successful BMW 02 Series, a car that wrote history in the German car company.

And the first 3-Series was the most successful BMW series.

The motorsport industry in the early '70s was crowded with Italian, British, French and German cars. Swedish brands also had something to offer with. But while some car-manufacturers were more concerned about large coupes, grand-touring cars and supercars, BMW focused on light vehicles that could serve as daily drivers and also be able to offer some satisfaction on the tracks.

The first generation of the 3-Series featured the so-called “shark-nose” with a rearward angled front grille. The first models featured two rounded headlights. The 2.0-liter and above engines were fitted with twin-headlights design while the other featured just two round headlights. The three-box design vehicle was offered only with two doors and it was available in a top-cabriolet version that was built by the custom coach-builder Baur.

Inside, there was room for four passengers and, depending on the engine option, the instrument cluster featured a tachometer or an analog clock. The dashboard was tilted toward the driver position.

The car was offered with a standard 4 or 5-speed manual transmission and some engine options were offered also with a 3-speed automatic. The top-model was the 323i version that featured a mechanical fuel injection system developed by Bosch. The 323 was offered with a choice of three different manual gearboxes, one with 4 and two with 5-speed, one with a dog-leg pattern. 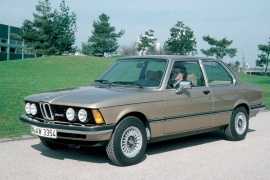