BMW unveiled the 2022 2 Series Coupe at the 2021 Goodwood Festival of Speed and, even though the hatchback sibling was front-wheel-drive, the two-door version kept the traditional rear-wheel-drive system.

When the German carmaker decided to change the names for its cars, it kept the even numbers for the coupes and the odd ones for the regular four or five doors versions. That's why the 1 Series Coupe became a 2 Series, and it was a relief for BMW fans when the compact vehicle appeared with an RWD or an AWD system.

The car's exterior showed a different front fascia than its bigger brother, the 4 Series. It didn't sport the tall and narrow "kidney-grille" but a flat and broad one. Its slim, LED headlights with an underlining daytime running light showed an aggressive look, and the wide grille on the lower side of the bumper complemented it. The enlarged front and rear fenders made room for wider tires of up to 255/35 R 19 on the rear and 225/40 R19 at the front, depending on the options.

Inside, BMW packed all the 2021 technology, including the Android Auto and Apple CarPlay connectivity. An 8.8" touch-screen infotainment display was offered as standard, while a 10.25" was on the options list. A 12.3" digital panel found its place in the instrument cluster and could show the usual information about the car and the navigation map or the music played on the sound system. Like its predecessor, the 2 Series Coupe featured two bucket seats at the front and a bench for two in the rear, with limited legroom and headroom but still suitable enough for short trips. The trunk offered up to 390 liters (13.8 cu-ft) of space. 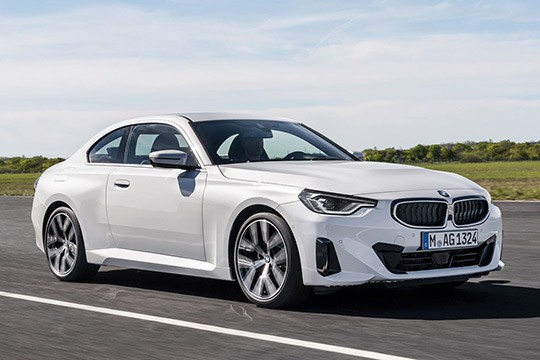