With a front fascia that revealed a broad and tall grille, the 2 Series Active Tourer tried on convincing customers that it was a bigger car. Yet, its 4.4 m (173”) length didn’t confirm that. At least, viewed in the rearview mirror, it could impress a bit. Its raked windshield and long greenhouse related to the overall vehicle’s length created somehow an SUV stance, or at least of a crossover. Viewed from its sides, it looked like someone took a 2 Series hatchback and pulled the roof upwards, lengthening the side pillars and the door panels.

Inside, the carmaker installed a dashboard with clean lines, in a minimalist design concept. BMW installed a digital instrument cluster instead of the older analog ones from its predecessor. It continued the display with an additional one that sat atop the center stack, with a touch-screen unit for the infotainment system. On the center console, extended under the dashboard, the carmaker placed a storage area with a wireless charger for mobile phones. The designers relocated the gearbox controls on the center armrest. Since the vehicle was designed for families, the carmaker created ample legroom for all five seats thanks to their raised mounting position.

BMW selected a wide engine choice for the drivetrain, either gasoline, turbodiesel, or hybrid, with plug-in hybrid versions from 2022. The 2 Series Active Tourer was the first from its stables that came fitted as standard with a seven-speed automatic (dual-clutch) gearbox on the entire range. There was no manual option for it. 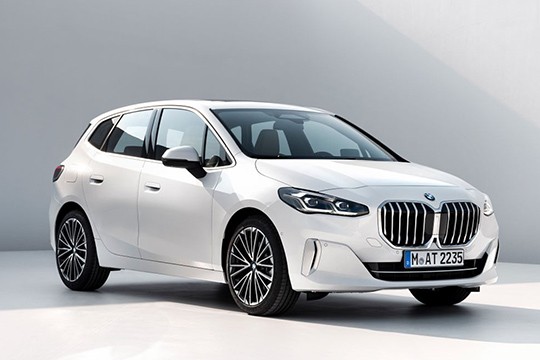