The 3rd generation of the Audi S3 was released in 2013 as the fastest 4-cylinder ever built by Audi.

The liter capacity was the same as for its predecessor, however, the 2.0-liter engine was developing with 35 more hp and surprisingly the fuel consumption was reduced.

Compared to the older model, the new S3 was lighter by 60 kg, thus it was faster and had an improved handling.

The car was equipped with an adaptive dynamic system that offered five modes: comfort, auto, dynamic, efficiency or individual. Even if it was a sports hatch, the suspension and the throttle response was adjusted depending on the driver’s preferences.

While the car looked like a regular family hatchback, it was even faster than a pure sportscar like Nissan 370Z.

The nice exterior design was completed by quad exhausts and 18-inch alloy wheels, while the interior featured sport seats covered in quilted leather and a flat-bottomed steering wheel, branded with the already known S3 logo. 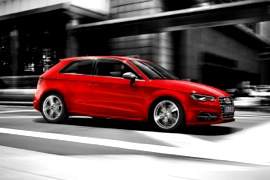