After more than 25 years since the introduction of the A3 lineup, the compact premium model evolved into a range of a few body shapes, but without dropping the original hatchback version.

When Audi launched the first-generation S3 in 1999, it tried to offer something special for the hot-hatch segment, and it managed to surprise its customers with the 210 hp sporty vehicle. When those ponies were not enough anymore, the carmaker stormed the market with the 340 hp RS3 in 2010. But in 2021, Audi raised the bar furthermore with a new generation: the 400 horses RS3.

Audi didn't make the RS3 to be subtle at all. It wasn't a sleeper by any means. Instead, it showed a very aggressive front fascia with a broad singleframe grille that sported an oval-shaped pattern. Its Matrix-LED headlights incorporated the daytime running lights, and a pair of huge side scoops adorned the lower part of the bumper. From its sides, the enlarged fenders, both front, and rear resembled those installed on the mighty Audi S1 from the '80s.

Inside, the sport bucket seats provided high bolstered areas to keep their occupants in place while hard-cornering. In front of the driver, Audi installed a fully digital display in the instrument cluster and a second display for the MMI (multi-media information) infotainment system. The rear bench was profiled for two but featured three headrests and offered a 40/20/40 split-folding system that expanded the trunk space from a mere 283 liters (10 cu-ft) to 1,104 liters (39 cu-ft).

Under the hood, the carmaker kept the inline-five turbocharged engine configuration with a unique firing order of 1-2-4-5-3. To increase the cornering speed, the RS3 sat lower by 25 mm (1”) than its A3 sibling or 10 mm (0.4”) than the S3. A seven-speed (dual-clutch) automatic transmission sent the power in all corners. 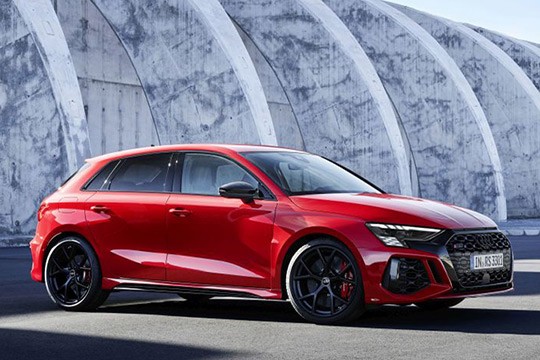