Ever since it launched the concept, Audi was proud of its all-wheel-drive R8 that shook the supercar world and proved to be a serious track-weapon.

The R8 RWS was the least expensive R8 from its times since the customers didn't have to pay for the front and center differentials. Its bodywork was similar to the regular R8 but with a few small different details. It was underscored by the matte black grille of the singleframe and the matte black air openings at the car's front and rear. The upper sideblades behind the doors were finished in gloss black, while the lower ones were body-colored. As an option, Audi offered a red strip that crossed the top of the car from the front bumper to the engine's lid.

Inside, the R8 RWS sported the same interior as the rest of the mid-engined Audi supercar, with sports seats fitted as standard. As an option, the carmaker offered bucket seats. Unlike any of its siblings, it featured a badge on the dashboard which stated the car number, such as "1 of 999." There was no infotainment screen on the center stack. It was shown inside the instrument cluster on the Audi Virtual Cockpit TFT display.

Behind the two-seat cabin, Audi installed the naturally aspirated 5.2-liter V-10 engine that produced 540 hp. It was paired to a seven-speed automatic (dual-clutch) gearbox. The electronic stability control featured a special drift function. 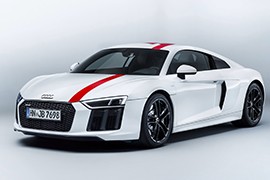