Audi didn't wait for the world financial crisis to end and introduced a V-10 version for its R8 supercar using the LeMans race car technologies.

After the German carmaker acquired Lamborghini, it started swapping technologies with the Italian car manufacturer. That resulted in the V-10 powered R8, which featured the same engine as the Gallardo but detuned, so it didn't compete with the raging bull supercar.

While the V-10 powered R8 looked very similar to its V-8 brother, it featured a few differences. At the front, the massive side-scoops that fed air to the coolers sported two slats instead of four. Also, the single-frame grille featured chromed accents instead of black. An essential upgrade for the headlights was the LED system, a standard feature for the R8-V10. Each headlamp integrated 54 light-emitting diodes, and at 6,000 Kelvin, it resembled the daylight. Behind the cockpit, the rear window grille sported a matte-aluminum look. Last but not least, the front fenders wore a V 10 badge.

The interior looked very similar to its V-8 sibling. It featured the same instrument cluster with a binocular-style panel. In addition, Audi installed the multi-media information (MMI) display connected to the Bang und Olufsen sound system on the center stack. Its leather-clad sport bucket-seats featured high bolstered areas on the sides.

Under the rear windscreen, in a mid-mounted position, Audi installed a 5.2-liter V-10 powerplant longitudinally. Thanks to its direct fuel injection system, it provided 100.9 hp/liter. It was just 31 kg (68 lbs) heavier than the V-8 unit but provided 105 more horses. 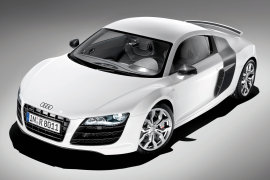