In the pursuit of getting a chunk from the premium market, Audi struggled to launch a competitor for the BMW 7 Series and the Mercedes-Benz S-Class.

But if they want a chunk instead of a slice, they have to be creative. And so they are with the introduction of the 2017 generation of the A8, the car has now semi-autonomous driving. On the highway in traffic jams, the driver can take a nap while the car stop and go with speeds up to 60 kph (37 mph) and turns by itself. As soon as the traffic clears and the speed is going above the limit, the driver has to take control of the wheel.

The luxurious interior, with a long, 3.12 meter (123.1 in) long wheelbase offers a big interior, especially for the rear seats. The high technology featured inside the car helps the driver, or the passengers have a relaxed trip.

For the engines, the pinnacle of it is the plug-in hybrid version. That, with its belt-driven starter-generator altogether with the 3.0-liter V6 TFSI engine, is summing up a total of 450 hp and 700 Nm (516 lb-ft) of torque. 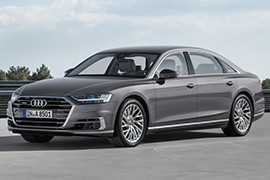