The third generation of Audi's flagship, the A8, was launched in November 2009 at Miami and in 2013 it received a facelift that added more stance on the road and more power under the hood.

The Audi A8 was already famous due to its appearance in various movies such as Spider-Man and Avengers.

The facelift featured Audi’s new headlights, the Matrix-Led. The headlamp was built by Hella and the LEDs were made by Osram. With their power combined, the final result was a spectacular flow of light in front of the car, but without side-effects for the oncoming drivers. The grille was redesigned as well. In the rear, the most noticeable detail was the exhaust tips, which was trapezoidal and not round as the pre-facelifted version. Moreover, the navigation system and the headlights computer communicated and the car could lit a curve before the driver even turn the steering wheel.

The cabin was gorgeous, with double-stitched leather, wood trims, brushed aluminum, and the highest quality materials. One of the best-isolated cabins, even at high speeds, the A8 L was incredibly silent.

The Audi A8 L was longer and wider than the A8, gaining 13 cm in both length and wheelbase. The main beneficiaries of the longer wheelbase were the rear seat occupants, with the A8 L offering a limousine-like space. 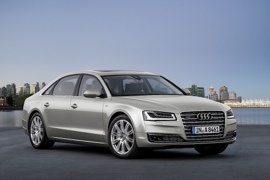