A new fourth generation Audi A8 was revealed in 2017 taking the brand's flagship model to a whole new level in terms of power, looks, and features.

Visually, the biggest changes can be seen with the new hexagonal grille, headlights, aggressive bumpers, stoplights, and waistline. The interior is also all new being dominated by a new infotainment system. The Audi A8 is also the first production automobile in the world to have been developed for highly automated driving. From 2018, Audi will gradually be taking piloted driving functions such as parking pilot, garage pilot and traffic jam pilot into production. 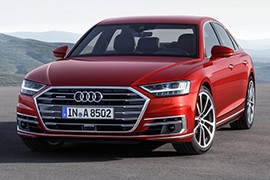