1 Audi e-tron Loses Its Battery Pack During a Collision, Hinting at Structural Problems

Audi was not yet considered a premium carmaker back in the mid-'80s when it introduced the facelifted version of the 80, but it did a marketing stunt that worked.

The German carmaker struggled hard to catch its main German rivals BMW and Mercedes-Benz. Its advantage was slim since most customers were stuck with the idea that a premium car had to have a rear-wheel-drive system. Audi came with the Quattro all-wheel-drive system, which proved to be a better idea, especially on loose surfaces. It already proved its value in rally-racing, but it was not a regular feature on production vehicles. The carmaker already had the 80 model, but that was not a serious contender for the BMW 3-Series or 190 E.

After the facelift, the 90 became easier to recognize than its 80 sibling. It sported a specific front fascia with two rectangular headlamps and a wrapped-around plastic bumper that featured standard parking and fog lights. At the back, the car featured larger taillights, which resembled those installed on the 100 model.

Inside, the carmaker installed a rectangular-shaped instrument cluster inspired by the Audi Quattro Coupe. Its center stack featured the climate controls above the stereo-cassette player and under the dual center vents. Its sport bucket seats featured bolstered areas. It was a sport sedan, and it wasn't afraid to show it.

Audi installed under the 90's hood only inline-five engines, resembling the one installed in the rally car. The top-spec version featured a turbocharged unit, while Mercedes-Benz and BMW were still relying on their naturally aspirated powerplants. 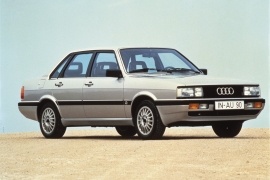