Aston Martin finally unveiled the One-77 at the 2009 Geneva Motor Show as a production vehicle, and it was one of the most awaited vehicles from that year, especially by petrolheads and those who were already prepared their checkbooks.

By 2009, Aston Martin already was out of Ford's ownership and tried to make a living with what it got. The car epitomized the British carmaker's skills in creating works of art that combined hand-built craftsmanship with advanced technologies. Its monocoque "tub" was made from carbon fiber, and it was very stiff, thus increasing cornering speeds.

From the design point of view, it showed a typical Aston Martin shell-like grille, but this time flanked on the outside by two air-intakes. The swept-back headlights from the fender sported LED daytime running lights. Sporting a clear GT shape, with a long hood and very raked windshield, the One-77 was deemed to compete against the best grand tourers on the market. Its short, sloped-back greenhouse featured narrow windows right before the shoulders from the quarter panels that covered the rear wheels. The idea was to create an elegant car, and that's why the design team didn't place a massive rear wing on the back. Instead, they relied only on the lower diffuser from the rear bumper.

Inside, there was no surprise as the carmaker placed a narrow cockpit fit for two, with highly bolstered bucket seats divided by a wide center console. There was no gear stick, just a few buttons on the center stack and the paddle shifters behind the steering wheel. In front of the driver, the clear layout of the instrument cluster showed five dials, with the speedometer and the tachometer covering the largest part of the panel.

Under the hood, Aston Martin and Cosworth engineers planted a 7.3-liter V12 naturally aspirated powerplant that produced a massive 750 healthy ponies, sent to the rear wheels via a six-speed automatic transmission. 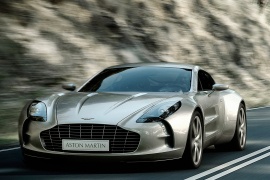 5 The Last Aston Martin V12 Vantage Roadster Is Here, You Can't Get One