In April 2019, Aston Martin showed the open-top version of its top-model, the DBS Superleggera.

In the tradition of the British Company, the cabriolet was named Volante.

It is strange that Aston Martin struggled to make a super-light (Superleggera) coupe, and then it added 150 kg (330 lbs) by chopping off the roof. The good thing about the added weight to the rear part of the car is that it balanced the car to a 50/50 weight distribution. The DBS still kept the David Brown letters in its name, to honor the former owner of the Aston Martin company.

The design was the same as the DBS coupe up to the A-pillars. What happened after that, it happened that the B- and C-pillars were gone and a sexy sleek open-top bodywork was exposed. In the rear, on the trunk-lid, there was a small spoiler. The Aston Martin engineers succeeded to lose only 3 kg (6.6 lbs) of downforce when compared to the coupe version.

Inside, there was a GT design for the interior. Even if the car was fitted with a 2+2 seating, the rear ones were unusual especially if the wind-stopper was installed. But it did help with the taxes.

Under the hood, the DBS Superleggera Volante featured the same 5.2-liter twin-turbo V12 engine as the Superleggera coupe. It was mated to an 8-speed automatic transmission, mounted in the back of the car to help the balance. 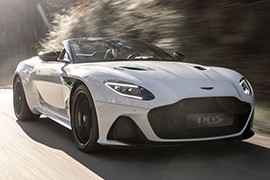