Aston Martin introduced a refreshed version of the DB11 in the form of the DB11 AMR, which offered higher performance and a specific look.

AMR is for Aston Martin, like the M is for BMW or AMG for Mercedes-Benz. These three letters stood for Aston Martin Racing, and it was the carmaker's department that handled all the racing vehicles and tuned them to win trophies in various racing events or prove that its cars were race-worthy. The AMR version of the DB11 was the last to receive an upgrade for its V12 engine and some other suspension components that transformed the sleek GT into a race-ready vehicle.

For starters, the car received new and V-shaped LED daytime running lights inside the headlights. The lime-green brake calipers and the line surrounding the vehicle at the bottom made it look better from its sides. All 100 units sported a gloss-black roof. In the back, the smoked taillights completed the aggressive package.

Inside, the carmaker added satin dark chrome accents for the gear selector and satin carbon-fiber trims. Its sports-bucket seats featured a lime-green line that resembled the British carmaker's colors on its race cars. On their headrests, Aston Martin embroidered the AMR lettering.

The most significant changes were under the skin. Its thicker anti-roll bar stiffened bushings for the rear axle, and the 30hp added to the engine made the car better fitted for a race-track. Other than that, it remained the same supple GT that could provide a long and comfortable ride. 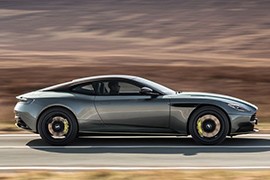