The same company that brought the super-light frame and engine Atom brought the nimble and off-road capable Nomad on the market in 2015.

And it had more than the Atom.

The Nomad was built for off-road. But not just any off-road trips since it didn't feature an all-wheel-drive system. It was a light buggy with a rear-wheel-drive with a windshield. That was the main advantage over an Atom. But they forgot to install a wiper on it. At least one.

From the outside, the roll-cage structure was the vehicle itself. The entire construction of welded and joined steel-bars formed a structure that allowed two passengers, two suspension systems, an engine, and a gearbox. That was it. To make it legal, the car-maker installed rounded headlights and turn-signals and wheel fenders mounted on the suspension struts.

It would be hard to call the seating area as an interior since it was in the open air. No doors or side windows. The exposed cockpit was protected from the front wind by a curved windshield made from a high-strength material to not crack at the first rock. The race-bucket seats were fitted with race harnesses. In front of the driver, there was a minimalist instrument panel and the ignition key.

In the back, the Nomad received a K24 Honda naturally aspirated engine that was tuned to produce over 230 hp. The car could have been ordered with dedicated off-road tires or all-terrain tires, which were better on the regular streets. 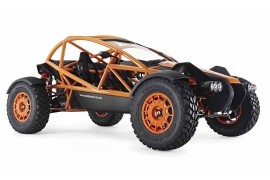