You probably haven’t heard of Ariel, a small British company with only 7 employees.

Or maybe more over the past years, but you get the idea.

Starting out as a university project, the Ariel Atom unveiled its first prototype in 1996 under the nameplate of LSC (Lightweight Sports Car).

The first Ariel Atom was released in 2000 and was driven by a naturally aspirated 1.8-liter engine that developed 190 hp.

It’s a bit inappropriate to describe the exterior design, as it was mostly the car’s chassis, the seats, the steering-wheel and the wheels.

The major upgrade was the chassis featuring a new diagonal side structure that allowed more interior room. The chassis’ width was increased by 60 mm .

A beautiful piece of engineering, the Atom 3 came with a new suspension and a Type R Honda-borrowed engine, the K20A. Ariel changed the 2.0-liter iVTEC’s mounts to improve the NVH level. The powerful unit developed 300 hp and was mated with a 6-speed manual gearbox that sent the power to the rear wheels.

For 2008, the Ariel Atom 3 featured a fly-by-wire throttle, a new gearchange, a new fuel system, a new ECU and a twin outlet exhaust.

As there was no windshield, driving at hight speed, even with a helmet, might have been challenging. To reduce the wind pressure on the driver’s head, Ariel used a simple deflector. 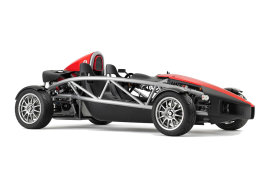