The Alfa Romeo AlfaSud TI was one of the most successful stories for the Italian carmakers.

In its attempt to stop the migration of the workforce from the South part of Italy to the North, the Italian Government pushed companies to build a new plant on the lower side of the peninsula. Alfa Romeo already had a factory in the North, and it said, "why not?". Soon, a small vehicle with front-wheel drive appeared from the fresh factory: the AlfaSud (Alfa from the South). It was featherweight, nimble, and fuel-efficient. Several production problems appeared and, after four years, the Italian carmaker brought an improved version.

It was hard to update the Giugiaro design of the AlfaSud and not ruin it. Somehow, the Alfa Romeo designers were able to do that. They changed the oval, horizontal headlights with four round lamps. A black, plastic grille was extended between them. The previously used chromed bumper was axed, and a new one, with a wrap-around design, was installed. In the back, on the trunk lid, the engineers insisted on placing a small spoiler to balance the car at high speeds.

Inside, there was a slight redesign for the dashboard. The carmaker considered that smoking was a bad habit, and it shouldn't be encouraged. It moved the ashtray at a lower position and moved the ventilation controls upper on the center stack. That was the biggest modification of the interior.

The Italians kept the same 1.3-liter and 1.5-liter engines with flat-four configuration, but they were upgraded with new carburetors. Both versions were paired to a 5-speed manual. 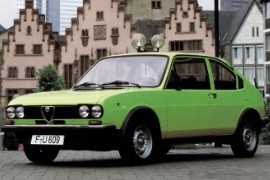