In 1980, Alfa Romeo brought the last refresh for its front-wheel-drive Alfasud on the market and paved the way for other FWD cars built by the Italian carmaker.

It was the last chapter of the Alfasud, a car born to decrease the southern part of Italy's unemployment rate. Despite all the odds, rust, and unskilled workers, the Alfasud was almost ten years old. During that time, the technological discoveries were big enough to convince Fiat's management that they must be applied to the car. Moreover, some safety measures led to other aesthetic changes.

For starters, Alfa Romeo kept the car's shape. It was still a five-door hatchback with a coupe-like tailgate. Maybe it wasn't the best idea for rear passengers' headroom, but it worked well for the vehicle's shape. Starting with the 1980 model, the Alfasud sported wrapped-around plastic bumpers, which were supposed to protect a pedestrian better if hit by a car at low speed. At the front, the big, rectangular headlights featured corner-mounted turn signals, and the grille looked more refined with its slim horizontal slats and the big Alfa Romeo shield in the middle.

Inside, the dashboard made a clear distinction between the driver's side and the passenger's, with the instrument cluster and the center stack combined. Its binocular-style dials featured white lettering and needles on a black background, and the warning lights filled the gap between the speedometer and tachometer. Thanks to the flat floor, the Alfasud offered true five seating positions where adults could actually sit well.

Under the hood, Alfa Romeo installed a choice of two boxer engines. Each of them was offered a choice of two power outputs. Apart from the base version, which was paired to a four-speed manual, the other three sent their power to a five-speed gearbox. 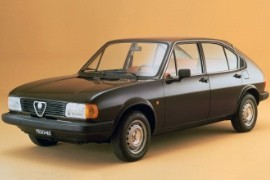 5 One-of-Two Alfa Romeo Alfetta GT GR.2s Still in Existence Is Up for Sale