It seems we've come across a game of numbers with the BMW 4 Series Convertible.

Mathematically, the 6th incarnation of the German compact premium convertible is better than all its predecessors, simply because it has moved from “3” to “4”.

But what about the real world, where rain kicks in just when you had planned a perfect open-air weekend, or some guy in a Mazda cuts you to demonstrate drivers of all brands can be douches at times - how does the BMW 4 Series come to improve the experience here?

The answer comes in the form of this review and we shall kick off by noting the car’s task is not that easy anymore. Back in the day, people were happy with driving a Bimmer with the wind through their hair, but modern day requirements can be overwhelming.

Frankly, some of the times, the drivers don’t even know what they want. On the other hand, BMW seems to be very confident about the cabrio-ization process of the F30 3 Series.

We are promised an overly dynamic driving experience and, this being a Cabrio, we naturally raised an eyebrow.


Sure, there are some details to be discussed here, but this impression was enough for us to stop, give the car a high five and treat it with plenty of attention.

As you approach the 4 Series Cabriolet, you are not going to stop and stare in amazement. That’s OK though - when we’re not talking about some hero of the auto world, it is difficult, truly difficult to make a convertible car too much of a looker. Thus, the 4 Series Convertible falls within the average of its class.

Still, where the roofline of the Coupe flows towards the rear, the new lines of the Convertible make a more clear differentiation between the layers of the car. The effect here is that the drop top looks larger that the fixed roof model.

Compared to its predecessor, the 4 Series Cabriolet comes with a longer wheelbase, wider tracks and rides closer to the road.

As for the differences to the 4 Series Coupe, the Convertible is identical, sans a fraction of an inch (10 mm) increase in height.

Going past the elegant Mineral White Metallic of our test car makes us notice the silhouette is pretty streamlined. Well, that’s because... it is - the 4 Series Cabriolet has a drag coefficient of 0.28, identical to that of the coupe. And if you stow the roof, 0.33 will be the correct value.

If you ever happen to be in a situation where you and some friends will have to lift a 4-Series Convertible, you should know that the weight distribution sits at a perfectly-balanced 50:50.

However, now when we’re just sitting in the parking lot, these are all just numbers. What does matter at the moment is that the car we are testing was dressed up in the Luxury line. This is a lifestyle convertible, not a sports car, so the aforementioned trim suits it perfectly.

We’re usually not big fans of chrome on modern cars, but the various shiny ornaments fit the 4 Series rather well. The exception? The “Luxury” shiny badges that look a bit like they’ve been added... aftermarket.


Once we climb aboard, we get the feeling that there’s not much sense in buying a 6 Series Convertible anymore.


The 4 Series is significantly smaller on the outside, but the difference in terms of interior space is not all that serious.

Just as non-serious are the differences to the 4 Series Coupe, a car who didn’t stray too far from the 3 Series sedan cabin, by the way. As we settle into the front seats, we find the seatbelt concierge arms of the Coupe missing. The belts are now integrated.

Moreover, there’s a tingly sensation in our necks - despite the really kind outside temperature, our colleagues left the new neck warmers on, at full blast. Really good humor, guys. To cease this madness, we address the new three-button area on the center console - aside from the controls for the two warmers, this also accommodates the switch that motivates the roof.

As you may have noticed throughout our reviews, we’re not too fond of contemporary BMW interiors. Not only do they look too much alike, but the quality of certain materials simply isn’t up to the premium job. We’ll stow the roof to forget about this now.

Remarkably elegant. This is how you can describe the foldable metallic top in motion. Alas, while BMW quotes an action time of 20 seconds, if you also include the windows rolling up and down, you end up closer to 30 seconds.

What this means is that the people who were behind you when you started playing with the top will direct less curses at you. Seems reasonable.

Still, once the roof is above you, it all makes sense. There’s a new headliner and while you really don’t feel the minus two decibels, it does offer plenty of confidence through its looks. With the top in place, the 4 Series Convertible isolates you from the real world like an actual coupe.

Perhaps BMW wanted to remind us of supercars and their rear shelves - behind the back seat, which can be folded, sits a central stowage compartment. As for actual stowage capacity, the boot offers 0.7 cubic feet (20 liters) more than before, for a total of 13 cubic feet (370 liters). Mind you, the luggage compartment is split between a central area and two smaller “pockets” on the sides - what BMW actually did here was to build the stowage space around the complicated structures that hold the roof in place and move it about.

With cars like this, you always end up frustrated when the top is folded and you want to access the back of the boot.


Well, the 4 Series Convertible has a button for special boot access.


Press it and the packed roof raises to give you access. Nice trick.

We’re roaming the city right now and we intend to stay here for a while. That’s because there are certain parts of the 4 Series Convertible which are almost exclusively dedicated to urban driving. First of all, you can’t quite use this for the sought-after open top motoring outside the urban areas. What brings the limitation? A clever roof the 4 Series may have, but its wind blocker is generations old.

Sure, the optimization means it is easier to move about or store, but the principle remains the same. You have to manually install it and this will basically delete the two seats in the back. With the wind stopper in place, you can have a leisure cruise up to about 50 mph (80 km/h). Without it, the disturbance in the force becomes annoying once you pass 30 mph (50 km/h). Like we said, we shall stick to city driving for now.

Another reason to do this is if you want to carry more than one passenger. Yes, access in the back is decent and you have enough room for an average person. In all areas. It’s a pity then that the rear seats are considerably firmer than the cosy front units. While you can have friends over in the back of your 4 Series Convertible for longer trips, it’s just not fair to do so.

On a scale, this is one heavy car, but you don’t really feel it while taking your 4 Series Convertible from one boulevard to another. Nonetheless, we’ve left them behind and we’re now taking on the broken asphalt of some forgotten street. No problem, the car feels up to the job. In fact, we’ve been subjecting it to urban challenges throughout the day and it feels moderately pleasant to do so.
Next page
12
78user rating 31 votes
Rate this car! 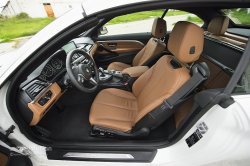 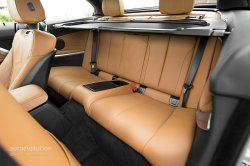 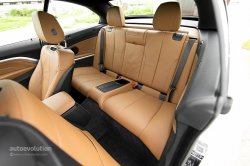 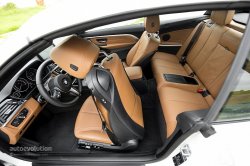 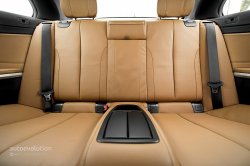 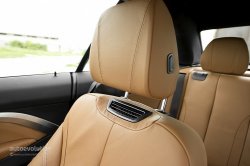 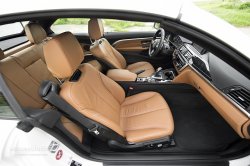 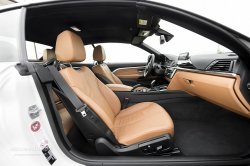 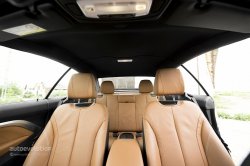 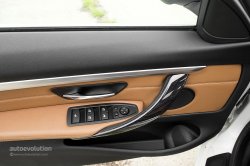 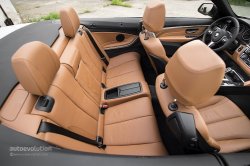 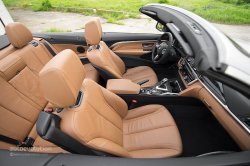