Refreshed and ready, the 2016 Infiniti Q50 returns with a trio of new turbocharged engines, for the latest in technology, performance and fuel efficiencies from this mid-sized luxury sports sedan. Dubbed a mid-cycle refresh, all three styles make great strides in an attempt to keep up with the Joneses, or in this case the Lexuses, the Hyundais, the Audis and others in the performance-luxury field.
Have they achieved their goal, or overstepped their boundaries? autoevolution had a chance to venture deep into the heart of Texas, to find out.

What’s on tap? Infiniti’s biggest seller in the North American market, the Q50 is available with four powertrain options that include a 2.0-liter turbocharged four-cylinder, jointly developed with Daimler, that produces 208-horsepower, a 3.5-liter V6 / lithium-ion hybrid powertrain that puts out to a max tuneage of 360-horsepower and two new 3.0-liter VR30-based twin-turbocharged V6 engines.

The first of the direct-injected 3.0-liters comes talking big with 300-horsepower and 295 lb-ft of torque, while the second arrives with an injection of steroids (not really) that spews 400 ponies from its loins. Thanks to twin pump intercoolers, peak power in this so-called Q50 Red Sport 400 comes on at 6,800 rpm and packs 350 lb-ft of torque as part of that one-two punch. The extra power is realized through the combo of a new turbine speed sensor and optimized blade design for an increase of up to 10-percent in turbine speed (up to 220,000 rpm). Infiniti claims that the new VR engines feature up to 85-percent new parts and are now about 40-pounds lighter than the versions they replace.

During our trip to San Antonio, Texas to experience the latest from Infiniti, the company made available a group of hand-built, pre-production Q50 Red Sport 400 sedans, some of which included their new Direct Adaptive Steering system.

This new digital steering system, according to the brand, offers advanced levels of steering feel and feedback that makes it seem as though it’s a traditional rack and pinion sport setup, but goes further to allow personalization of the response and feel according to the driver’s preferences.

Being at the top of this particular food chain meant that the testers also featured Infiniti’s Dynamic Digital Suspension (DDS), that combines with the standard double-wishbone front and multi-link rear kit, to “tighten up” the suspension for a flatter stance when rounding tighter turns and those with diminishing radii. Revised front and rear stabilizer bars do their part to prevent lateral movement for better tire contact from the staggered (19-inch) size Dunlop SP Sport MAXX summer performance run-flat tires.

The Q50’s entire performance parameters are controlled by the car’s Drive Mode Selector, which dials in according to driver preferences ranging from Personal, Standard, Snow, Eco, Sport and Sport+. This sport sedan, which competes with the BMW 3 Series, Hyundai Genesis, Audi A4 and others, is available with any engine combination in an owner’s choice of rear- or Intelligent All-Wheel-Drive.

A new Active Lane Control system is now available which enhances on-center driving feel, adjusts for road surface irregularities and changes in crosswinds and virtually eliminates steering fine-tuning. It can be combined with Infiniti’s Direct Adaptive Steering system, which, according to Infiniti, is the world’s first digital steering system.

Looks inside and out. We’ve always thought the Infiniti Q50 to be a smart looking ride. Following its redo in 2014, the company has chosen to “keep on keepin’ on” in an effort to offer an alternative to such Teutonic offerings such as the Audi A4, the BMW 3 Series or even the Mercedes-Benz C-Class.

As such, little is different on the Q50 Red Sport 400, other than a slightly more aggressive front fascia, the red “S” badging and the addition of the small “t” to designate this Q as being powered by a twin-turbocharged engine.

Turning inward, the Q50 featured excellent multi-adjustable Sport seating in front with proper bolstering and thigh support in all the right places. The two-toned T-formation dashboard and center console separates driver and passenger from each other, and thankfully includes the new Nissan / Infiniti style of infotainment control interface now located just south of the transmission gear selector lever. This new location falls directly underhand for quick access to navigation, camera and menu controls inside the car. It sits just above the Drive Mode Selector.

In the rear seat, there is plenty of legroom, and a 60:40 split fold-down rear seat. Beyond the seatbacks lie 13.5 cubic feet (382 liters) of trunk space.

There are certain times when you get into a car that you know it just feels right. This Q50 Red Sport is one of those cars.


It’s a well put-together sedan with excellent pulling power to get off the line fast. Neck snapping fast, in fact. While in the passenger seat, we weren’t even aware of the illusion of speed until our heads snapped back, bouncing off the headrests several times before becoming acclimated with the Q’s newfound forward thrust.

A deep, husky voice is always sexy, and in this case the Red Sport 400 delivers. The 3.0-liter twin turbo mill with its performance exhaust system greeted a squeeze from our right foot with a roar that was impressive both within and outside the cabin.

Steering with the available Direct Adaptive Steering found several levels of input according to how you triggered the Drive Mode Selector switch. Switching to Sport mode sets the most responsive steering setup, but advancing to Sport+ (through system settings menus) with Dynamic+ response, goes a step further, offering the same effort, but in a quicker fashion via a digital shift of the steering ratio.

We also had a chance to see the Q50 Red Sport 400 find its own way through its Active Lane Control, which will gently steer through sweeping curves, as well as do its part to “maintain lane positioning against crosswinds.” Infiniti touts it as a semi-autonomous protocol that offers a look at what autonomous driving vehicles may be capable of in the future. We also found the system tends to give up the ghost when encountering sharper turns.

We thought that road noise was rather pronounced on the pre-production model we tested, probably owing to the summer-grade Dunlop tires and the coarse aggregate used to pave the highways throughout Texas. But not all was lost, as we eventually found smooth surfaces, which under normal drive conditions, showed off the Q50’s refined and quiet driving style.

The 2016 Infiniti Q50 Red Sport 400 is Infiniti’s attempt to build the 2014 Q50 Eau Rouge concept car for everyone. Have they succeeded? For the most part, yes, but some may still need convincing. Sure, it doesn’t sport the GT-R’s 3.8-liter twin-turbo V6 engine behind its grille, but the 3.0-liter TT V6 and the Red Sport’s suspension is still pretty stout, offering a snap of the neck at every turn. For many of us, that’s all the convincing we need.

Oh, and as Henry Ford never said, you can have the Red Sport in any color in the Q50 paint lineup.
84user rating 31 votes
Rate this car!

Sir May B. Bach

A communist Infiniti with 400 horsepower?

I have a feeling that the lads who are in charge of naming products at Infiniti are not very familiar with the history of communism and socialism in general. Otherwise, they probably would have never christened this Q50 with a moniker that harks back to the… ahem... Red Sport International organization from the 1930s.

To refresh some of you younger folks' memory, the Red Sport International was part of communist movement culture in Soviet Russia back in the 1930s. Really, none of you ever heard anything about the Spartakiade? I was under the impression that… ahem… Wikipedia was supposed to bring culture to the masses, not take it away.

Getting back to this Infiniti, I suppose that its dumb “Red Sport” moniker comes with the territory, since the company itself has a nonsensical name. How on Earth did they choose Infiniti, anyway? Was the name a winner in a misspelling contest held by the marketing department?

Still, despite its communist connotations, this Q50 seems to be more of a capitalist toy. Those 400 horsepower sound good on paper but they sound even better in real life and I didn't feel it underpowered one bit. Sure, there's a bit of lag involved but that's what happens when the market demands turbochargers instead of good old natural aspiration or, even better, superchargers.

In fact, I think that's the only way to improve the Q50 Red Sport's powertrain, by throwing aways its turbochargers and replacing them with a massive Roots blower that's sticking out through the hood. Maybe Infinitea will read my short blurb and take this into account on its next sports sedan.

Don't get me wrong, I absolutely loved this little red sports sedan, but there was something about the way it accelerated when driving by a Lamborghini that made me feel uncomfortable at times. It was either the color, the name, or both, and it's common knowledge that bulls always want to hit red stuff and that color makes them angry, right?

I know there's hardly any connection between the Q50 and the Nissan GT-R, but my colleagues tell me that its prototype predecessor actually had a modified GT-R engine under the hood.

Plus, this one is called Red Sport, the other one was called “Eau Rouge,” which Google Translator is telling me that it means “Red Water.” Anyway, I don't mind red cars, but if you're like me and have a phobia of bulls and cows, then this car is definitely not for you. The only think related to cows that I like is milk, since I am not a cheese person, but I digress.

No, really, I liked it, a lot actually, just minus the stuff I already mentioned above. The space inside is plentiful and there's a pretty luxurious ambiance, especially if you like plenty of touch screens in your car. I'm a gadget freak at heart, even though I have no idea how to properly use the latest smartphones apart from taking selfies.

Luckily, the Infiniti Q50 Red Sport only takes “yousies,” which I heard are like the opposite of “selfies.” No, seriously, it has forward cameras or lasers or something that can see other cars on the road. If the car in front of you brakes on the highway, the Q50 will also brake, but on its own, even if you're applying make up in the vanity mirror at that moment. There's a massive amount of safety gadgets in this one, indeed!

If there's one thing I hate about certain cars, is trying to be something they're not

OK, so let me get this straight. Infiniti teased us on more than one occasion with something called the Q50 Eau Rouge, a Frankenstein of a car that had an engine borrowed from the mighty Nissan GT-R.

After those endless teasers and press drives and so on, what did the sharpest tools in the Infiniti shed do? They cancelled it and came up with the Q50 Red Sport instead. I mean, I may not be schooled in the ways of managing a global automotive business, and the Red Sport does have its own place in the world, but why couldn't have both models?

I'm not even going to say anything about the name, even though I have to agree with most of my colleagues and call it dumb. What is Red Sport, anyway? Is it sportier than Blue Sport or Fuchsia Sport?

That said, I kind of liked the way that this warmer engine pulls mid-range, but I wouldn't spend my non-existent money on it. By the way, is there any carmaker out there that accepts food stamps or hard labor instead of credit cards? I'm thinking about replacing my 1980s hooptie with something newer and preferably German. 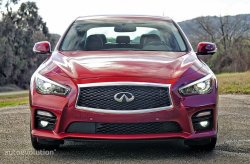 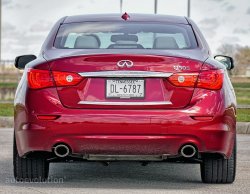 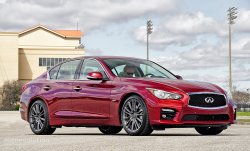 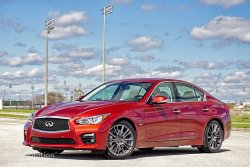 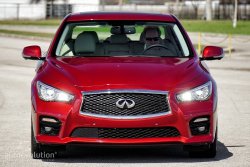 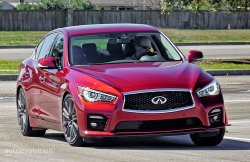 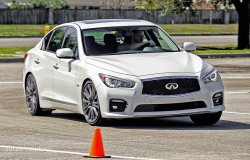 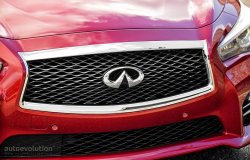 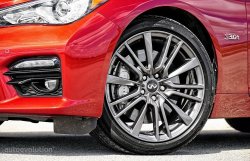 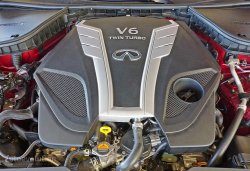 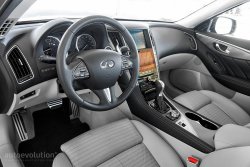 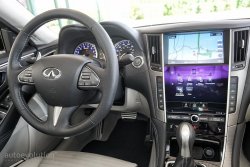 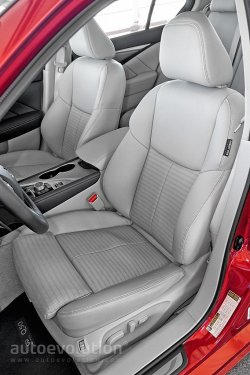 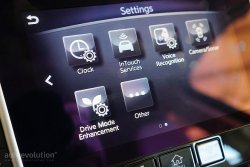 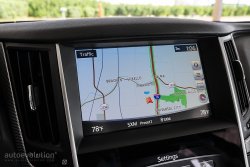 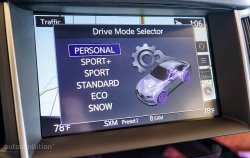 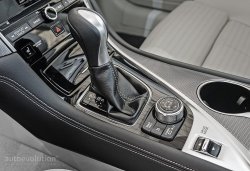 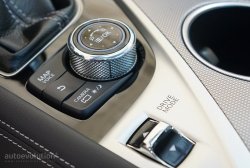 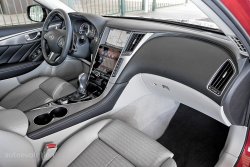 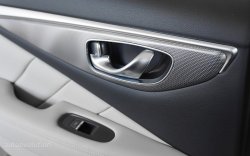 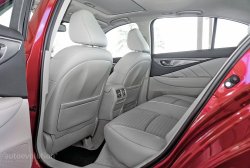 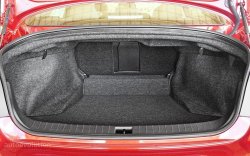 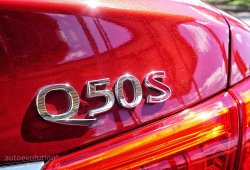