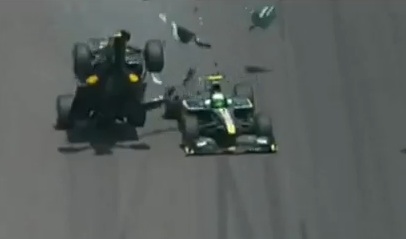 As he was involved in arguably the most spectacular crash of Formula One racing since Robert Kubica's accident in the 2008 Canadian Grand Prix, Australian driver Mark Webber told the media how he felt when his car started to become airborne after hitting the rear of Heikki Kovalainen's Lotus T127 in Lap 9 of the European Grand Prix, at Valencia.

While trying to pass the much slower Finn, Webber decided to brake later than the Lotus driver and his car was thrown into the air upside down, went through a headline banner then flipped back the right way and was projected into the tire barriers.

“I knew as soon as it happened that I was involved in a huge crash, that I was just a passenger,” recalls the 33-year old driver from Red Bull, whose car was reduced to the form of a cockpit after bumping back from the tire barriers.

“Headline stuff was going through my head when I was in the air, but that's the game we're in and some days that happens. I lost some points, but in the end when you're up there, you're not worried about points.”

“You cannot control where you are going and how hard the hits are going to be, and of course the hits were pretty hard. I was worried about hitting a bridge or something in the air. I knew I was a long way up. Fortunately, the first was not too hard,” said Webber, who praised his chassis – the one that got him back-to-back wins in Spain and Monaco – for how it treated him this season.

After leaving the medical center with only a few bruises, the Australian surprised everyone with his positive thinking. Except for the few words mentioned before about his incredible crash, Webber immediately switched attention to his title chances in the championship.

“I remain incredibly positive. We go on, it's halfway through the championship, so bloody hell, let's get on with it,” concluded Webber.