1 81-Year-Old Gets Carjacked While Feeding Homeless, Does Not Lose Hope in Humanity

3 Attempted Carjacking Stops When the Victim Gets Inspired, There's Video of It

4 Ever Had Something Stolen From Your Car? This Brings Vengeance to a New Level

5 PSA: A Tin Box Can Prevent Your Car from Getting Stolen
Car video reviews:
Coverstory

Watching This Video Might Make You Want to Get a Home Security System, Lock Your Doors

Have you ever woken up to find something odd on your property? Like things that have been moved in your yard or your vehicle's trunk or hood is ajar, although you do not remember leaving them that way. If so, you should be careful, as someone might have stolen something from you or have tried to do so.
6 photos

Recently, Rob Ferretti published a video of two thieves who attempted to steal his Ferrari 458 Speciale. The vehicle in question attracted plenty of attention, and Rob had mistakenly left it with its doors unlocked overnight. Fortunately for him, he did take the keys away from the vehicle, and the thieves were looking for an opportunity heist, not for that vehicle in particular.

In other words, it means that the two people who tried to steal Rob's Ferrari were not the best in the world at their craft, as they were not prepared to start the vehicle. However, they were wise enough to wear gloves, as well as to have ski masks on before reaching Rob's property, so they are almost impossible to identify.

Moreover, the two thieves had shown up in a vehicle that is believed to be stolen, so it cannot be traced, either. Despite all this, Rob's video does show the dangers of having an expensive vehicle in front of your house instead of in your garage, as well as how some people will try to take your things away from you.

Sadly, besides looking for fingerprints, as well as watching security cam footage, the police cannot do that much in a situation like this. With that in mind, Rob reminds everyone to be sure to lock their vehicles, as well as their homes, every time. It is the first theft deterrent – especially for opportunity criminals, and the next one is an alarm, followed by a home security system.

As you can see in the video below, just having one camera or two is better than having to guess what happened to your property. If you have a more advanced system, which can record things, save them in the cloud, and so on, you can even go and do a bit of detective work to find if the people you have seen attempting to steal your stuff had previously visited your property to look for things to steal. 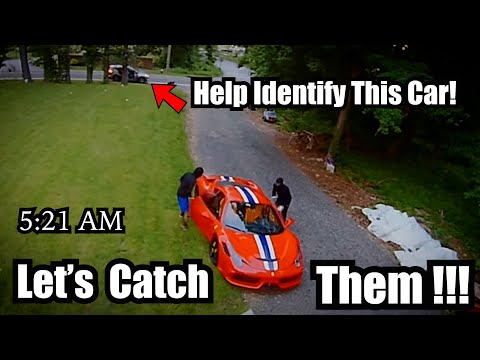