1 Ducati Shows the draXter Concept, a Sport Interpretation of the XDiavel

Victory Motorcycles uploaded a new video teaser for their upcoming new bike. They call this machine Octane, and we have all the reasons in the world to believe that it is the production version powered by the new liquid-cooled engine.
6 photos

First of all, obviously, the liquid-cooled engine is Victory's newest addition to the range. It debuted in Project 156, a bike that was engineered for the 2015 edition of the Pikes Peak International Hill Climb.

After Project 156, the engine was used in two custom bikes, one manufactured by Zach Ness of the famous Ness family of motorcycle builders, and the other by Urs Erbacher. Ness' machine represented the American take on the new Victory platform, while Erbacher stood for what a new Victory machine could look like if built in Europe.Ignition, Combustion, Octane
The first bike with the new liquid-cooled engine was Erbacher's and he named it Ignition. When Zach Ness tried his hand with the new power plant, he baptized his creation Combustion, in a most logical follow-up manner.

Seeing Victory announce a new machine bearing the name Octane makes our supposition consistent with the previous incarnations, albeit custom ones, of the new mill.

Victory describes Octane as being "Modern American Muscle," making us believe we're in for a neat powercruiser-ish motorcycle. If anything, Octane could be Victory's answer to the Harley-Davidson V-Rod, the first liquid-cooled beast to actually rival Milwaukee's muscle bike.

The short and enigmatic video teaser only lets us know that Octane will have a minimalist dash with a single gauge. It's hard to tell how it looks but we can expect it to be a hybrid instrument, incorporating a large speedo and an LCD screen showing a lot of adjacent info.

And we guess the burnout scene at the end of the teaser is meant to symbolize the brawny character of the Octane. Polaris, the company that owns both Victory and Indian, is making serious efforts to fight H-D's supremacy in the North American markets, and the Octane looks like one more bike aimed at eroding Harley's pedestal. Just as the Ducati XDiavel wants to. 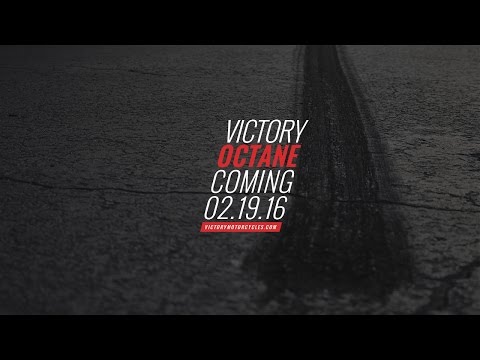