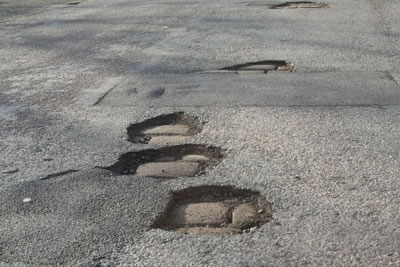 It's no news that potholes have severely damaged cars driven on British roads and, even if most drivers were prepared to spend some money on repairs as soon as the cold season comes to an end, it seems like the final bid is exceeding even the worst estimates. A research conducted by Warranty Direct reveals that the overall bill for pothole damages could even reach 1 billion pounds, as motorists are paying no less than 3 million pounds every day.

"Unless something more is done soon, we'll be faced with a road network that would be more at home in a Third World country. Whether it's the cumulative effect of continuously driving on bad roads or the sudden jolting of a deep pothole which does the harm, our crumbling roads are costing motorists millions," Duncan McClure Fisher of Warranty Direct said in a statement.

On average, a driver has to pay around 315 pounds for damages caused by potholes on British roads but, in some cases, payments could even reach 4,000 pounds. Most damages affected suspensions or axles, Autoblog UK reported, while six percent of the vehicles suffered damages to tires and wheels.

"The recent council injection of £100 million will not solve matters. Councils need to wise up and get creative about how to address the problem," McClure Fisher added in the statement.

"Back in December, we predicted that a gloomy combination of a very cold winter, huge underfunding and mediocre repairs to roads could potentially lead to the worst ever pothole season – unfortunately our forecast was largely correct."