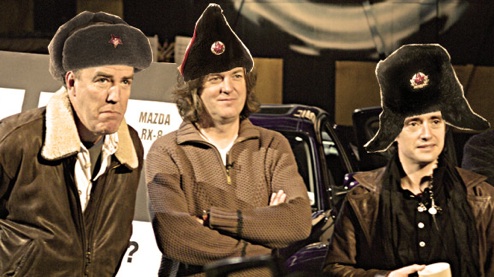 In case you have any doubts about what the title means, let us make it clear enough for you: Russia will get its own version of Top Gear, complete with Russian-speaking hosts, and just the subtitled version they've been getting so far.

Top Gear is quickly becoming the most popular auto show in the world, not to mention the most franchised. The big surprise is that they chose Russia as their next country of expansion. Up to this point, Top Gear only chose English-speaking countries, but this time, they couldn't have chosen a more different region.

The reason behind this move could have something to do with the large numbers of the demographic “trapped” between Russian borders and the fact that the Russian auto market is right now struggling to take lead of the Eastern block. Also, Top Gear magazine seems to have made quite an impression over the populace, and this too seems to be a reason for the move.

The news comes from the horse's mouth as it were, the Top Gear official site, which posted a very funny photo, promptly nicked by us (but by other news outlets too, primarily because it's just so damn funny) and a rather humorous statement which includes bear skin caps references (as does the photo by the way).

The project is still “hush-hush at the moment” but a 15 episode first season is as clear as Russian vodka. No candidates have yet been confirmed but speculations are sure to flow onto the web until the weeks end like a tidal wave.

This would be the latest venture in the Top Gear madness, with the brand having recently released an American and Australian version. Sadly, both of these seemed to be poor carbon copies of the original, and this Russian version better have more than dismantled nuclear silo and frozen tundra references if it hopes to make it for a second season.