3 B-2 Spirit Leaving Looks Like an Alien Spacecraft Arriving

4 C-5 Galaxy Spotted While En Route to a Date, Massive Machine Looks Stunning From Above

Thunderbirds F-16s Show Hot Afterburners, They Look Like Pieces of the Sun

Modern-day military aircraft are extremely potent machines, and it is all owed to the incredible hardware that goes into making them. One such hardware is the afterburner, in effect an additional combustion piece that can increase thrust for various maneuvers.
16 photos

Generally speaking, pretty much all jet-powered military aircraft have afterburners, as they are the ones who need an extra punch to go supersonic, or to take off, or to perform some insane aerial maneuver.

The close-up of two afterburners we have here shows the technology in action mid-flight. The afterburners are flaming hot on two F-16s flown by the U.S. Air Force Thunderbirds demonstration team, as the pilots are executing a maneuver called burner 360 – it happened during the Orlando Air and Space Show in Sanford, Florida, in mid-October, and a video of the maneuver, this time from the Jones Beach Air Show, is attached below.

Although we see just two airplanes in this pic (click main photo to enlarge), the maneuver actually involved four F-16s, all performing in sync a 360-degree turn with afterburners on and air brakes engaged.

Despite a large number of them currently in service around the world (over 4,500 have been assembled since the 1970s), one doesn’t get to see the F-16 behave like this under normal circumstances. But the Thunderbirds, as the world’s third oldest aerobatics teams, has pilots specifically trained to do things military pilots would not normally need to do. And manhandling the engine on the plane is one of those things.

The F-16 is powered by a single powerplant capable of delivering close to 30,000 lbf of thrust with the afterburner raging hot. The top speed the plane can reach, really fast, is over Mach 2, which would be 1,535 mph or 2,470 kph. During extreme maneuvers such as those performed by the Thunderbirds, it can withstand up to nine times the force of gravity. 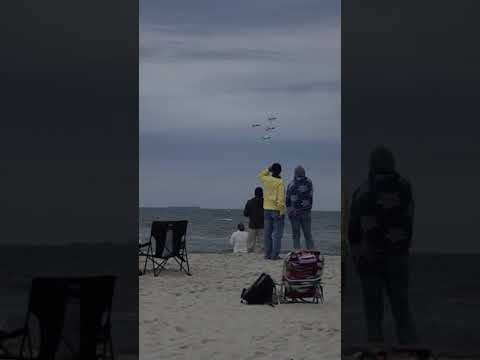