2 Idiot Ruins BMW Playing Tug of War with a Tractor

4 Go for a Ride in this Custom Turbocharged BMW E34

5 BMW E34 5 Series Drifts in a Backyard
Car video reviews:
Up Next

We never knew people from Kyrgyzstan are so in love with BMWs. It looks like former Soviet countries are still hung over older Bavarian cars, especially 1990 models. Could they know something we don’t?
1 photo
It could be, but it’s nothing new as a matter of fact. For quite some time now, people have been saying that cars made today are not as reliable as they used to be. In this regard, most people around the world consider the 1990s as the golden age of motoring.

It was back then when the perfect compromise between just the right amount of electronics were combined with the excellent purely mechanical parts inside a car to deliver autos that were both reliable and comfortable enough to live with for extended periods of time.

Maybe that’s why Eastern Europeans prefer to buy older models than new ones, being afraid of the complexity of recent powertrains and possibly other failures. The car in the video below is an E34 540i model and it is being driven by a resident of Kyrgyzstan that seems to have a passion for AK-47 machine guns.

At least that’s what we can tell from the profile pic of his Youtube channel that has an E34 5 Series holding up a Kalashnikov. As far as we can tell, his car is fitted with the standard M60 V8 that used to make 286 HP and 400 Nm (295 lb-ft) of torque and was equipped with a manual 6-speed gearbox on a couple of models.

According to official numbers, only 3,203 540i models were ever made with a manual gearbox and out of them only a handful are still running today. That means we’re actually looking at a pretty rare car here.

The uploader claims that his car has an AC Schnitzer chip installed that boost power but judging by how much travel the suspension shows in the clip, we find that hard to believe. So you don’t have money to change your dampers but you can afford tuning your car at AC Schnitzer? Either way, the soundtrack provided by that engine is worth our time. 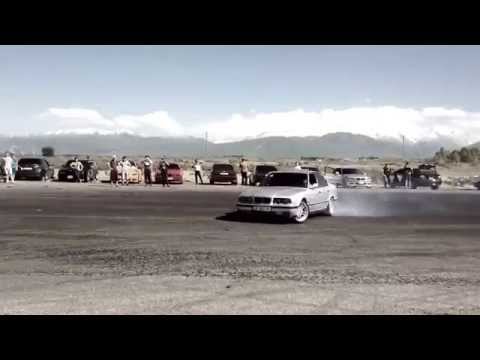