3 Koenigsegg One:2 Is the Cutest Hypercar Ever

Two McMaster University graduates have spent their last six year to build up the world’s fastest mobile hot tube. The two recently launched a crowdfunding campaign to bring Carpool DeVille, a fully functioning hot tube build in a 1969 Cadillac Coupe DeVille, to a win a speed racing event in Utah, to take place in August.
1 photo
Take a bath and ride to 100 miles per hour in a hot tub, that is what Phil Weicker and Duncan Forster thought nobody ever did. And they were right. So now they need $10,000 to get the project finished and ready for the racing contest in Utah, that is to take place on 9-15 August. The two engineers from Los Angeles have already finished the blue classic Cadillac, but they need money to attend at the racing tournament.

As to their project, we have to admit it is inventive and cool at the same time. Duncan and Phil bought an abandoned 1969 Cadillac and converted it into a mobile hot tub, but it wasn't as easy as it sounds. It features a fiberglass hot tub in the car that is filled with water, improved heating, suspension, controls and pool plumbing.

The engine is the original 375 horsepower with the 525 lb-ft (712 Nm) torque which will propel the car to the 100 mph mark and heat the water in the tub. The trunk was converted into the pool’s physical plant and the steering system is water tight.

Besides making sure everything is set with the mobile hot tub, the two were also working with the land speed racing community to ensure Carpool DeVille would meet CTA’s (Chicago Transit Authority) strict safety requirements. Hard to say if the team will make it to the racing track, but we have to admit this baby is quite the toy, but we’ll leave you check out the movie below to decide that yourself. 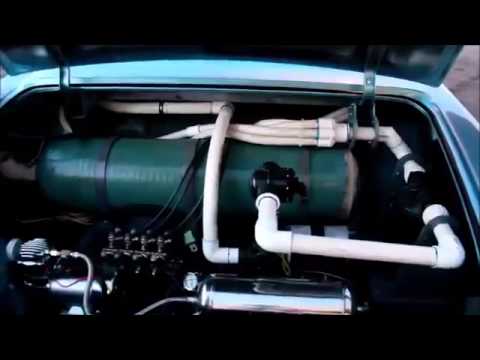