What were you doing when you were 12? Playing with your toy cars? Collecting scale models? Maybe racing in a virtual world on your PS or Xbox? Well, this kid puts you to shame as he is actually driving a supercar on a private track.
1 photo
Steven is the son of a famous competitor that regularly shows up at Shift-S3ctor Airstrip Attack events and while his dad drives a Ford GT known as the Black Mamba, he went for something a little more stylish.

His weapon of choice comes from the UK and it’s a McLaren 650S, a proper supercar by any means of measuring performance. The best thing about is that he actually gets to drive the thing, even though he is not of driving age yet.

The thing is, on a private track, you apparently can do that if the driver is skilled enough. And keeping the 650S in check is not exactly for the faint-hearted. However, something tells us Steven has been doing this for quite some time now.

Otherwise, we can’t really explain how he could win the NA class trapping speed contest with 162 mph (261 km/h). However, considering the specs of the car, it’s not all that impossible to achieve.

The price for one such beauty is easily above $250,000 and Steven estimates his to be worth up to $300,000. However, we find it rather funny that he doesn’t know exactly how much it was. Maybe his dad didn’t want to scare him with the real price tag of the McLaren. Either way, he probably is the coolest kid at his school. 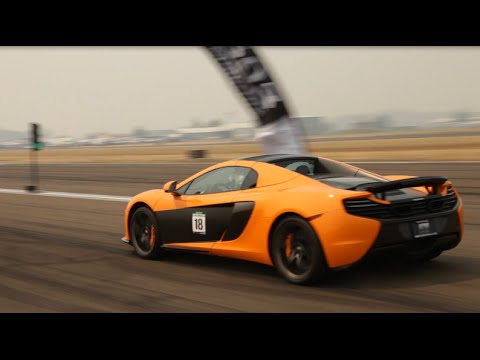