The Fungus That Fueled My Car 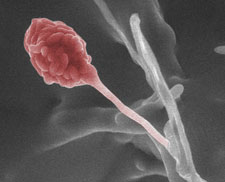 Bio diesel is not even that popular among car owners and already new alternatives to this rather exotic type of fuel are finding its way from the...jungle. Yes, that might sound strange, but the jungle does seem to offer answers to many of humanity's problems.

Apparently, a professor from the Montana State University has found a fungus that produces a new type of diesel fuel. Mr. Gary Strobel and his collaborators call the newly found fungus' output “myco-diesel”.

"These are the first organisms that have been found that make many of the ingredients of diesel," Strobel said. "This is a major discovery," he added.

The researcher found the diesel-producing fungus in a Patagonia rainforest visited in 2002. There, he collected several specimens, including the branches from an ancient family of trees known as "ulmo." According to Montana State University's press release, when he and his collaborators examined the branches, they found fungus growing inside.

They found out that the fungus, Gliocladium roseum, was producing a number of compounds normally associated with diesel fuel, which is obtained from crude oil. The scientist believes that myco-diesel could be an option for those who want alternatives, even to ethanol.

"The main value of this discovery may not be the organism itself, but may be the genes responsible for the production of these gases," Gary Strobel said."There are certain enzymes that are responsible for the conversion of substrates such as cellulose to myco-diesel."

What's more, the researchers found out that the fungus can grow in cellulose.

"We were very excited to discover that Gliocladium roseum can digest cellulose. Although the fungus makes less myco-diesel when it feeds on cellulose compared to sugars, new developments in fermentation technology and genetic manipulation could help improve the yield," Strobel explained.