4 Jason Momoa Is Still Being Awesome on His Fave Knucklehead He Built From Scratch
Car video reviews:
Space Junk

Most riders are practical in their choices: after all, what good is a bike if you can’t take it out? There is a market for the less than 1 percent of those who would rather look at the motorcycle instead of actually riding it.

The $1.9 Million Harley-Davidson Blue Edition, an Exercise in Outrageous Luxury

The Harley-Davidson Bucherer Blue Edition is the epitome of that market and, at the same time, an exquisite, beautiful piece or art and an exercise in outrageous, pointless luxury. At $1.9 million, it is the world’s most expensive motorcycle to ever be built – a title it still holds today, 2 years after it was introduced to the world.

Unveiled in 2018 in Zurich, the Blue Edition represents a partnership between Swiss jeweler and watchmaker Carl Bucherer and custom bike shop Bündnerbike, with the Harley-Davidson seal of approval. It’s actually a 2017 Softail Slim S that has been taken apart and rebuilt into something else.

Something which could be a functional bike, if it were not for the $1.9 million price tag and the fact that it’s covered in gold and diamonds. Forget about the Harley-Davidson exhaust growl, this is a novel way of getting all eyes on you.

Blue Edition was presented on the occasion of Bucherer’s 130th anniversary and the launch of the Blue Line. It was a one-off, a fully-bespoke bike aimed to showcase the Bucherer craftmanship against a canvas it had never used before: a Hog. It was also the perfect opportunity to get press. We’re still talking about it today as the world’s most expensive bike, so it worked.

The Softail Slim S has been modified to such an extent that it no longer resembles the original. It took a team of six one full year to design and develop the Blue Edition, with the handwork alone needing over 2,500 hours. The bike includes 630 diamonds, a one-off watch from Bucherer, and many gold-plated parts (including the back of the mirrors, screws and bolts), and is itself silver-plated under the six layers of paint, needed to create the trademark Bucherer iridescent blue.

All metal parts were built by hand and covered in 24-carat gold, including the bolts, throttle valve, hand levers, foot controls and reservoir caps. The seat is cowhide hand-sewn in Switzerland, and the rims are custom made. The 1.8-liter, Air-Cooled V-Twin engine with 148NM of torque also received some tweaks, so it’s not just the new retro-style bodywork that’s new.

The engine is illuminated from the inside, making Blue Edition the world’s only bike to ever be built this way.

The entire bike is painted a stunning blue, which Bucherer is famous for. The company wouldn’t reveal the details behind the method of achieving this color, as it’s a trade secret. But Bucherer did say it involved six different layers over the plating in silver.

And then there’s the cherry diamond on top. The highlight of the Blue Edition isn’t the custom work done on the bike, but the carats that weigh it down. Two armored-glass safes illuminated from inside are located on either side of the tank: one contains a Heaven six-prong solitaire ring with a 5.4-carat diamond, while the other includes a one-off Bucherer watch based on the Patravi TravelTec II model and inspired by the biking culture.

The watch sits on a suspension / damper system made of silicone rings, meant to prevent vibrations from the engine from damaging it. A potential owner could also take the watch out to wear it on his wrist, but in this case, he would have to settle for riding with an empty safe.

“The watch holder doubles as a winder, meaning that the watch stays wound and running even when the bike is in the garage,” Samir Merdanovic, Head of Manufacture Movements at Carl F. Bucherer, said at the time. In case you were stressing out about who would wind the watch on your useless bike.

Diamond Dizzler rotating rings from the Bucherer jewelry collection have been adapted to fit the handlebars and then securely fixed there through a secret Bündnerbike method. You wouldn’t want to sprinkle diamonds on the open road, would you?

That is, if you’d ever take this beauty out. Bucherer says the Blue Edition is fully functional and fit for riding, but as of the time of writing, it remains in its possession. Maybe it will never sell it, since it was only meant to help them flex for the world and get tons of publicity in the process.

That said, the Blue Edition is not without merits. As an object of art, it is outstanding in both aesthetics and craftmanship, and even gets points for creativity. In more practical terms, though, who would want or afford to hop on such a flashy Hog? 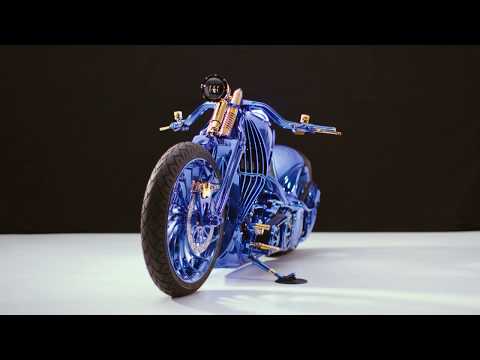 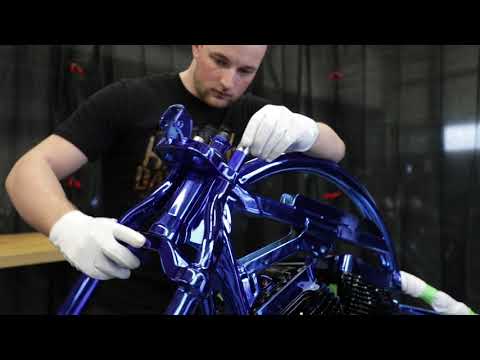