3 Could the F-14D Tomcat Have Been Effective on a Modern Battlefield? Let's Discuss

4 How I Drifted the USS Wyoming

2023 Toyota Sienna Limited Edition Is a "Gotta Have It" Minivan, Carmaker Says

This week, the Greek island of Skyros was the scene of what turned out to be a massive military exercise that drew in both American and Greek forces. Officially dubbed the Alexander the Great 22 joint training raid, the exercise was an impressive display of warfighting machines, but also human units working together.
10 photos

The American Marine Corps' 22nd Marine Expeditionary Unit, embarked on the San Antonio-class amphibious transport dock ship USS Arlington (LPD 24), trained together with the 32nd Hellenic Marine Brigade for better “interoperability and force readiness,” according to the Navy, but we’re more interested here in the machines that were involved in the maneuvers.

The main photo of this piece shows a CH-53E Super Stallion helicopter (Marine Medium Tiltrotor Squadron 263), apparently sneaking up behind a Greek CH-47 Chinook helicopter, and looking like it’s ready to impale it with its refueling apparatus.

Beneath the two flying machines, a U.S. Navy air cushion landing craft, assigned to Assault Craft Unit 4, is making quite the splash, as it races toward the shore, rounding up an epic snapshot of military greatness.

As for the helicopters seen here, the Super Stallion is one of the heavy-lift workhorses of the Navy and Marines. The family was introduced in 1981, and a little over 140 of them are now deployed with America’s naval forces. Each is powered by three General Electric engines, developing 4,380 hp each, potent enough to lift 73,500 pounds, including external load.

The Chinook is significantly older, having been born in the 1960s as one of the few tandem rotor such machines in existence. It too is capable of carrying a lot of weight, 28,000 lbs (12.7 metric tons) to be more precise. The Chinook is famous for its ability to perform pinnacle landings, meaning it can set its rear on limited-area surfaces, like say rooftops or cliffs, while the front stays in the air. 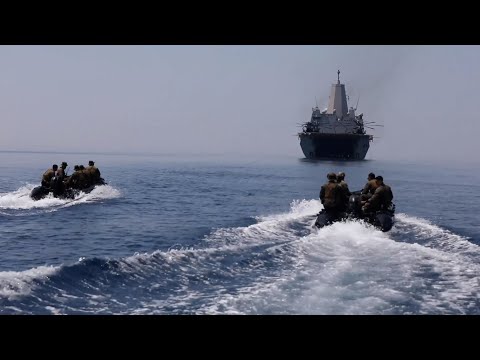