Forget about the Mercedes-Benz G63 AMG 6x6. If you're in the market for a six-wheeled vehicle, you can get your hands on one of this little... um, moderately sized beauty.
14 photos

Apart from the major car makers that we know and love, motor shows like the one in Frankfurt that's just about to start are also a perfect opportunity for smaller companies to showcase their products in front of large audiences.

One such company is very eloquently called LIMOUZINE and will bring at this year's Frankfurt Motor Show a stretch version of the previous smart Fortwo model.

A good question would be 'why'? Well, I'm guessing the answer is pretty simple: to draw attention. You see, the smart MADEFORSIX is LIMOUZINE's (somebody forgot the caps activated...) first project, so they really needed something special to stand out among that huge sea of cars.

And who would call a 2.69 meters long smart Fortwo turned into a 5.5 meters long limousine anything but special? I mean, for heaven's sake, it even has an extra set of wheels. That's due to the regular smart's proclivity of pushing the wheels as close to the car's limits as possible.

The smart Fortwo isn't just a short car, it's also tiny in every other possible aspect. That means it's also rather narrow, so it's not ideal as the starting point for a luxurious stretch.

Which probably meant even more reasons for LIMOUZINE to go ahead with the transformation. In the rear, the smart MADEFORSIX carries all the usual stuff that makes a limousine what it is, stuff like comfortable seating, privacy, champagne, glasses and some TV screens.

As the name suggests, it's able to carry six people, but it's not clear if all six will fit in the rear, or the two original front seats are also taken into account. Other modifications include the new door which opens upward, but has a boxy shape that contrasts greatly with the rounded ones at the front.

LIMOUZINE says its vehicles will be available for hire, which doesn't make it very clear whether they'll also be offering them for sale or not. Whichever the case, I'm guessing you're just as curious as we are to see what they'll come up with next. 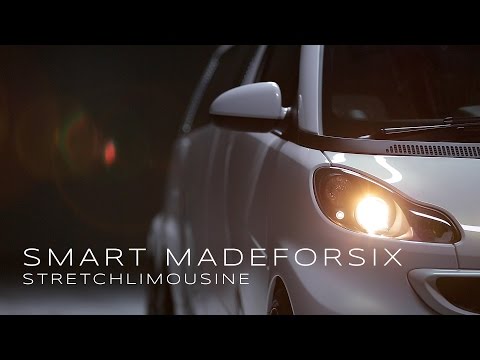