Alex Oagana
Even though last year's billionaire mid-cycle refresh for the Mercedes-Benz E-Class W212 also brought a jump in horsepower and performance for the E 63 AMG models, there are still people out there who bought the pre-facelift variants and want something faster without shelling out thousands more for the new car.
1 photo
The only solution in this predicament is to modify their cars, obviously, with the M157 engine in the E 63 AMG W212 being known as one of the easiest to work on if huge power gains with little work are desired.

The 5.5-liter twin-turbocharged V8 is not exactly lacking power when stock, but when some less-restricting downpipes, some new air filters and an ECU tune come into the equation, it can really become a monster.

The example in the video below, for example, is sporting BMC air filters, RADO downpipes and a intermediate ECU tune from RENNtech, resulting in no less than 630 hp at the rear wheels and a massive 996 Nm (735 lb ft) of torque.

That amount of power probably transforms it in just another tire-shredder from a dig, but in a rolling drag race it makes it one of the fastest sedans money can buy.

With the Estoril Blue BMW M5 F10 in the footage below also sporting a couple of similar mods – mainly catless downpipes and an ECU tune by BMW – but delivering 635 hp at the rear-wheels, you would think that it should be a pretty fair race.

Well, as it seems, the slightly less powerful E 63 AMG pretty much mops the floor with the M5, but unfortunately we don't have the exact numbers for the drag, so that we can see just how fast the two cars were. 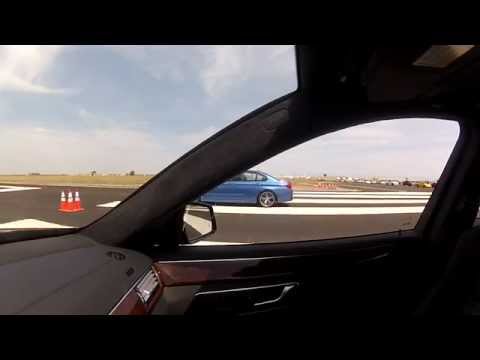