2 The Cheapest Electric Car in the World Is Actually Decent, Though Silly-Looking

Elena Gorgan
China has a reputation for making cheap stuff, whether it’s (knockoff) clothing items, gadgets of all types and even e-bikes and electric cars. Many of them are worth the money you pay, but the Changli seems to be the exception to that rule.
11 photos

The Changli is currently the world’s most famous tiny EV. Bought by Jason Torchinsky, senior editor of Jalopnik, and delivered to the U.S. in July this year, it is now a star on its own, having been branded the world’s cheapest EV (that’s actually a decent tiny car and not some piece of junk that comes apart at the first porthole).

Ever since Torchinsky had it delivered to his home and unboxed, he was amazed about how sturdy it was and the quality of the build. Since then, he’s taken the Changli racing and made steps towards having it registered for the road. More recently, he took it to teardown expert and engineer Sandy Munro, to see if he could learn how the makers in China were able to put together such a decent car at $1,200.

He didn’t get a definite answer to that, but he got something better than this: Munro’s sincere amazement that the Changli could be such an amazing car at this kind of money. You can see the full video at the bottom of the page.

Together, the two looked over everything, from the interior and finishing touches on the exterior, to the motor, suspension and brakes, and the wiring. Munro’s conclusion was that most of the Changli was put together by hand and that it was “mystifying” that the makers could do such an impressive job without taking the price higher.

The Changli, or the Changli Nemeca, is made by Changzhou Xili Car Industry and is offered with a variety of options as regards seating inside (you get two- or three-seat configuration) and battery packs. Torchinsky has the least powerful motor, at 1.1 hp, which takes him as fast as 25 mph (40 kph), but that’s an estimate, since the display is never right. Battery is good for 23 miles (37 km) and takes under 4 hours for a full charge.

Of course, the Changli is not technically a car, even though it has AC, radio FM and even a rearview camera. It’s much closer to a golf cart or a neighborhood vehicle (NEV), but it’s still built with due consideration to quality and durability. For $1,200. 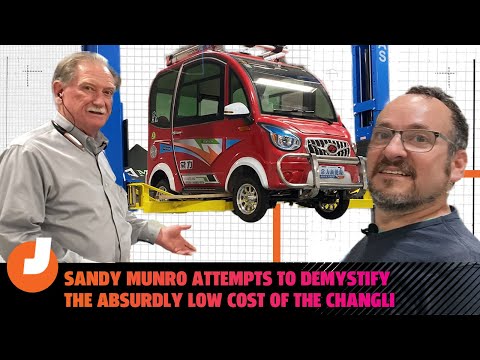