1 Hamilton Praises KERS ahead of Valencia 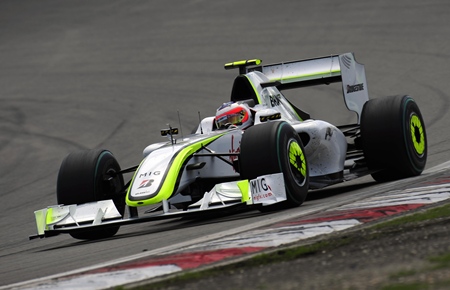 Brawn GP have climbed back on top of the field after the 3-week summer break in Formula One, as Rubens Barrichello today topped the time charts in the first practice of the European Grand Prix, at Valencia. The Brazilian driver stopped the clock at 1:42.460, less than two tens of a second ahead of the McLaren duo Heikki Kovalainen and Lewis Hamilton.

The first part of the session saw Red Bull's Sebastian Vettel and Brawn GP's Jenson Button battle for the lead, while soon joined by the two McLaren Mercedes drivers and Barrichello. The Brazilian eventually managed to top the field with 15 minutes to go, after which he made one more attempt to further improve his lap time. Unfortunately, a driving mistake – a stuck gear – prevented him from improving in the late stages of P1.

The top three drivers ended the P1 within two tens of a second, while 4th placed Button finished the morning more than 6 tenths of a second behind his teammate. Vettel had to settle for 5th place, right ahead of Force India's Adrian Sutil.

The German driver managed an outstanding outing on Friday morning, as his VJM02 has been heavily updated ahead of this weekend's race. Williams had one driver in the Top 10 through 7th placed Kazuki Nakajima, who was followed by Mark Webber and Fernando Alonso. Finally, Ferrari's Kimi Raikkonen completed the Top 10, only 0.005 seconds ahead of Toro Rosso's Sebastien Buemi.

As expected, Ferrari's Luca Badoer recorded the very last lap time on Friday morning, finishing the P1 more than 3.3 seconds off the pace from leader Barrichello. This weekend's other debutant Ramain Grosjean, stepping into the R29 for the first time this season, ended the session in 18th place, a full second behind teammate Alonso.

Here are the complete results of the first practice session in Valencia: