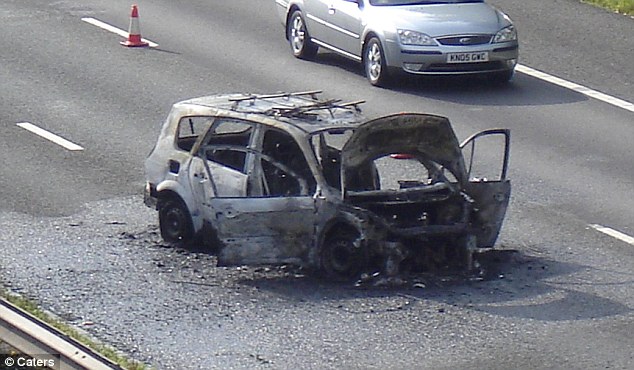 Some don’t believe in luck, seeing it as one person’s lack of control over a situation, but the members of a family who managed to escape minutes before their car turns to a giant ball of fire sure think otherwise. It all happened this past weekend on the southbound carriageway between junctions 1 and 2 near Blackwell, Worcestershire.

According to The Daily Mail, one family that sat stuck in a traffic jam on the M42 motorway, saw smoke exiting from the bonnet of their Renault Scenic. They immediately pulled over and got out of the vehicle that just a few minutes after exploded.

Two lanes of the motorway were closed for no less than nine hours following the incident, causing substantial traffic disruptions. Fortunately, no one one was hurt.

'When I first spotted the smoke my initial reaction was that it was a bit of early morning mist,” said Alan Proudfoot, who snapped the moment the car exploded, for the aforementioned source. "But as I got out of my vehicle I realized it was smoke coming from a car. I began taking pictures when all of a sudden it went from practically nothing to a fierce ball of flames. It was shocking how quickly it turned.”

“It started popping and then a number of explosions fired pieces of shrapnel across the carriageway,” he added. “Smoke and flames shot 100ft into the air. It was like a bomb had gone off. It looked like something from a Hollywood blockbuster. It was a miracle the family got out safely.”