Gabriel Brindusescu
Last week, Lexus provided us with a sneak peek at its all-new compact crossover NX, showing only its front rear quarter, a bit of the side and a lot of black areas. But as it normally happens in this domain, a leaked image found its way on the internet to reveal more.
1 photo
Twitter user AutoFerriere found the pic in French L’automobile Magazine’s May issue, snapped a frame and published it on the Internet. Funny how people gain access to such kind of material, isn’t it? However we’d like to thank whoever is hiding behind that username for providing the leakage.

As you can imagine, the production version pretty much ditched all the cool stuff at the back we saw on the LF-NX concept. No more huge cutouts near the taillamps, much toned-down edges, a standard bumper with an air-diffuser-mimicking lower part and, of course, no big triangular exhaust tips (yeah, we know they were on the LF-NX Turbo concept, but still...). Boooo! 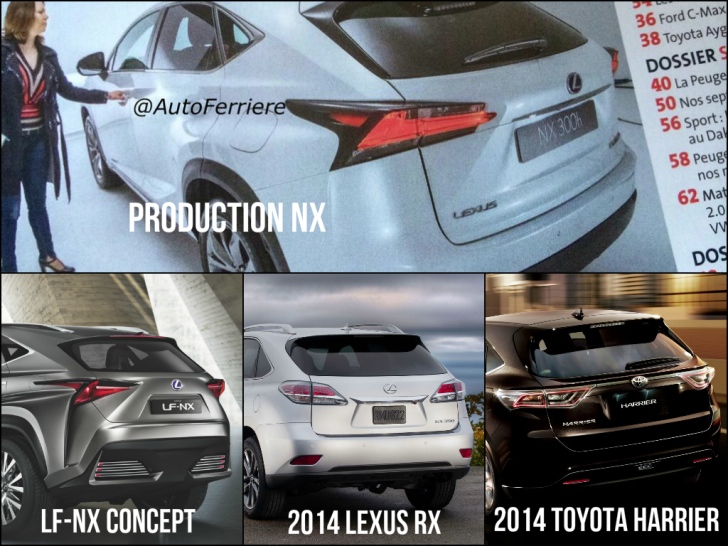 So, basically, what you’re left with is a more sloped RX rear with different stoplights (which are OK though) and a few more lines. In fact it resembles more with the rear of the RX’s Japanese version Toyota Harrier, which is even better than the Lexus equivalent regarding design.

Normally, Lexus vehicles based on Toyota models are the flamboyant ones, but funny enough, Toyota made one looking better than the old, boring looking RX.