There's Something Awfully Wrong with the Maserati Ghibli

Ciprian Florea
Rumored to be unveiled in production form at the 2013 Frankfurt Motor Show scheduled in September, the Porsche 918 Spyder has been spotted in Milan, Italy.
1 photo
Wearing the famous Martini racing livery, the 918 Spyder prototype was videotaped while wandering the streets of Milan. The video also shows a few interior shots and gives us another chance to hear that V8 engine roar.

As a reminder, the Porsche 918 Spyder will be powered by a 4.6-liter V8 mill paired with two electric models and rumor has it the new German supercar will have about 875 bhp under its hood.

The LaFerrari and McLaren P1 contender will also gain a four-wheel steering system sourced from the Porsche 911 GT3 and will reportedly lap the Nurburgring in less than seven minutes.

Until any of this is confirmed, watch the Porsche 918 Spyder take on the streets of Milan below. 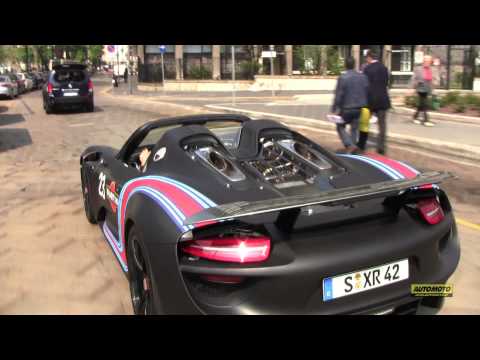