1 SVT Cobra Is the Pony Car You Dreamed of as a Kid, Priced Like It's 2003 Again

2 Now Worth Millions, the BMW 507 Was a Commercial Failure That Almost Ruined the Brand

One-of-Few RHD BMW 2002 Baur Convertible Surfaces as Timeless Classic, Can Be Had

Back in 1966, when in America, the mighty muscle cars war was raging, over in Europe, things were a lot calmer, but not less exciting in some respects. It was then, for instance, when German carmaker BMW came up with a new interpretation of its so-called New Class Sedans. Christened 02 Series, the line was supposed to be the entry-level Bimmer. As fate would have it, it turned into a timeless classic, extremely sought after by today’s collectors.
14 photos

The 02 Series comprised several variants, starting with the 1600-2 (or 1602), with the number 2 representing the number of doors on the thing, and ending with the mighty 2002 and with most of them having their own distinct subvariants.

In the case of the 2002, those subvariants include cherished names in the collector world like the ti Diana (just 12 made), or GT4. Highly regarded is also the convertible version, which surfaced in 1967.

Put together by a shop called back then Karosserie Baur, the bodywork was, at first, one of a standard convertible, then switched to a Targa top in the 1970s. Regardless of their type, though, these open top 2002s remain some of the rarest in the Series.

Take the one we have here, for instance. It’s a 1973 model year, blending a black convertible rear cover with a removable Targa top, and it comes in right-hand drive configuration. Add to that the round tail lights, and you’re left with just 260 of these ever made.

This particular one is listed for sale by Collecting Cars, and less than a day is left in the bidding process. 27 bids were placed for it, and the highest one sits at just under $20,000 (28,000 Australian dollars).

Like all others of its kind, it is powered by a 2.0-liter naturally-aspirated inline-four engine, tied to a five-speed manual transmission and developing 100 hp. The engine has been in use for 28,763 miles (46,290 km), as shown on the odometer.

Wrapped in Mint Metallic Green over a black leatherette interior, the car moves on 15-inch split-rim alloy wheels wrapped in Toyo Proxes tyres. It’s not in absolutely perfect condition, showing minor blemishes, scuffs, and signs of patina here and there, but, in some cases, imperfection is exactly what this type of car needs to be truly… perfect.

Back in 2006, the BMW underwent a restoration process, and that might be what explains its relatively good condition. Unclear when, it also got upgraded a bit to more modern standards, and it now features things like a JVC infotainment system with satellite navigation and Bluetooth connectivity.

We’re told the 2002 is going complete with “the owner’s manual, a stamped service book, a BMW restoration book, the original BMW 2002 sales brochure, a jack, and a spare wheel.” 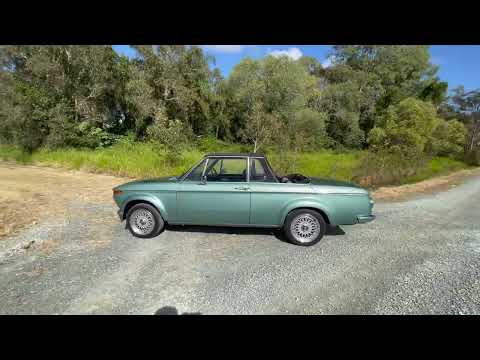