4 A Short Story of the Most Valuable BMW 507 in the World: Elvis Presley’s

Conceived to flourish in the U.S. market, the gorgeous roadster was way too expensive, which led to appalling sales figures and a commercial failure of epic proportions that almost buried the Bavarian company. Decades later, it became one of the rarest, most sought-after BMWs with well-kept examples demanding seven-figure sums.

Now Worth Millions, the BMW 507 Was a Commercial Failure That Almost Ruined the Brand

During the early 1950s, BMW was raising from the ashes left behind by the Second World War. Automotive production resumed in late 1952 and by 1954, the Bavarians were among the fastest-growing companies in West Germany thanks to models like the 501 and its luxurious 502 sibling.

Although the aforementioned cars were available as two-door convertibles, their design was reasonably outdated so for the all-important U.S. market, BMW needed something new.

In 1954, sales manager Hanns Grewenig along with New York-based luxury car importer Max Hoffman – the man responsible for influencing the creation of automotive icons like the Mercedes-Benz 300SL and later, the Porsche 356 Speedster – approached BMW decision-makers with an ambitious idea for a new range of luxury sports cars that would bridge the gap between the ultra-expensive 300SL and the cheap, underpowered Triumph or MG models that were being imported from the UK.

The executives liked the idea and assigned the project to one of their best engineers, Fritz Fiedler, who had to develop the cars using as many existing components as humanly possible, in order to minimize costs.

For the bodies of both models, initial sketch work was done by BMW’s Ernst Loof, but his designs were considered too conventional by Hoffman who argued that American buyers were expecting something more spectacular. The influential dealer convinced the Bavarians to hire industrial designer Albrecht von Goertz who had previously shown a lot of promise while working for Studebaker. This proved to be the right move, as von Goertz produced a couple of breathtaking designs.

Unquestionably the best was that of the 507. A low-slung, aluminum-bodied masterpiece, it was a truly modern roadster that looked nothing like previous BMW models.

As standard, stopping power was provided by Alfin drum brakes all around and a power braking system was optional. In addition, later models would receive front disc brakes manufactured by Girling.

Since the 507 was developed with American buyers in mind, power didn’t come from a traditional six-cylinder, but from an upgraded version of BMW’s first production V8. Codenamed M507/1, it was an all-aluminum unit with a similar design to the Cadillac OHV V8 and Oldsmobile Rocket engines. Displacing 193.3 ci (3,168 cc), the powerplant came with polished combustion chambers, high-lift cams, a chain-driven oil pump, dual Zenith 32NDIX two-barrel carbs, and a 7.8:1 compression ratio. Mated to a close-ratio four-speed ZF manual, it could make a healthy 150 hp. While this figure didn’t make the 507 a 300SL-killer, the 2,932-pound (1,330 kg) roadster was fast enough for the era. Moreover, thanks to its short wheelbase and rear-wheel-drive setup, it was reportedly thrilling to drive.

Introduced to the public at the Waldorf-Astoria Hotel in New York in the summer of 1955, the 507 quickly captured the hearts and minds of sports car enthusiasts. Dubbed one of the most beautiful production cars that money could buy, the hand-assembled BMW was scheduled to arrive in dealerships several months later with a starting price of around $5,000 ($54,533 today).

Hoffman promised he could sell around 5,000 units per year, but unfortunately, things didn’t quite go according to the initial plan. Although the chassis and engine were developed around existing platforms, the hand-built bodies drove production costs to astronomical levels. Because of that, the 507 eventually launched with a price tag that exceeded $9,000 ($96,715), which made it more expensive than the 300SL “Gullwing”.

This didn’t prevent wealthy buyers like John Derek or Elvis Presley from buying one (or two, in Elvis’ case), but for the average enthusiast, it was obscenely expensive. In the end, Hoffman’s idea for a reasonably priced luxury roadster never came to fruition and instead of selling 507s by the thousands, the dealer managed to find a new home in the U.S. for only 34 units.

Production of the beautiful roadster ceased in 1959 with a total of 252 (plus two prototypes) examples leaving the Munich factory. It was a financial disaster for BMW, who never expected such appalling sales figures. The company lost so much money that it came close to bankruptcy, which it narrowly avoided thanks to an infusion of capital from German industrialist Herbert Quandt. The brand eventually rebounded with the release of the much more affordable 700 and 1500 (New Class) ranges.

In the decades that followed, the 507 became the holy grail for many BMW collectors. Apart from being arguably the most beautiful production model in company history, it’s also one of the rarest.

Today, a surviving model in great condition has an average value that exceeds $2 million- according to classic.com. Just a month ago (May 2022), one of just eleven units that came with a removable aluminum hardtop sold at an RM Sotheby’s auction in Monaco for €2,030,000 ($2,144,004).

Even though it was a commercial failure that almost ruined BMW, the 507 shows that sometimes, huge sacrifices have to be made in order to produce a masterpiece. It is still one of the most exquisite cars to don BMW badges and a design icon that - like fine wine - seems to get better with age.

In the YouTube video below by Petrolicious, you can watch one of Elvis’ 507s being driven on a twisty road and discover how it was brought back to its original state after becoming a pile of scrap. 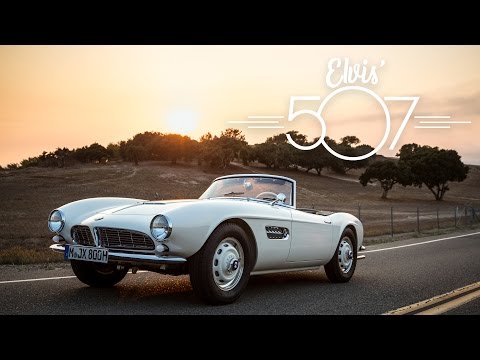