4 The U.S.-Built Ariel Atom 4 Is an Insane Road-Legal Open-Wheeler That Costs $75K

Cristina Mircea
Sure, it may have no doors, airbags, or roof, but the Ariel Atom 4 is still a road-legal car. So there’s no reason why you couldn’t use it to get coffee and lunch at a drive-thru. And that’s exactly what producer/writer Zack Klapman did, trying to figure out what the fuss is all about with Ariel’s open-wheeler.
6 photos

Ariel’s latest Atom model is an insane vehicle, completely redesigned from nose to tail, with the only components kept from the previous models being the brake pedal, the clutch pedal, and the fuel cap. Everything else has been changed in the Atom 4, from the bodywork and wheels to its engine and everything else.

Even though it was released in 2018, you can’t easily get bored with such a crazy vehicle, at least not until Ariel releases a new model. Especially when you know you can legally take the Atom 4 for a spin to an Arby’s, for some fried chicken and a boost of adrenaline.

Klapman decided to treat Ariel’s wonder car both as a regular street machine as well as the speed-loving beast that it was really meant to be. First stop? The drive-thru, where it kept an amusingly “low profile” while the driver was waiting for its coffee to go.

After it also made two glorious appearances at another drive-thru for lunch and at a Shaw’s grocery store, the Atom 4 was ready to hit the track, to show what it’s really made for. Professional driver and Formula Drift champion Dai Yoshihara took the wheel. You’ll have to see for yourselves what happened next. 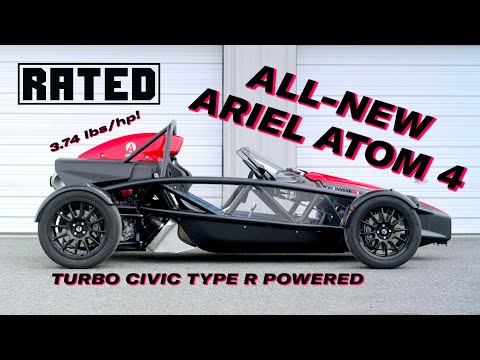