Nissan Unveils Systems That Allow LEAF to Power a House 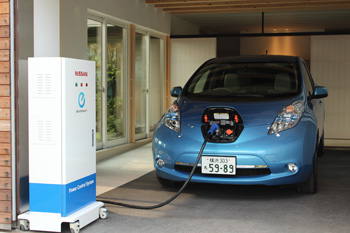 Nissan has created a system that allows a regular LEAF to provide electricity from its lithium-ion batteries installed onboard to ordinary households. Basically, you could “drive” your electricity to a place that’s not on the grid - a useful feature in the areas ravaged by the recent earthquake, and one that that could come in handy in coming years.

Using this system, the LEAF can be used as an electricity storage device for houses in preparation for power outages and/or shortages. The lithium-ion batteries can store up to 24kWh of electricity, sufficient to power an average Japanese household for about two days (the average electricity usage of a standard home in Japan: 10~12 kWh/day).

The new system was unveiled at ‘Kan-kan-kyo’, a demonstration house built in front of the Nissan Global Headquarters by Sekisui House Limited under ‘Smart Network Project’ conducted as part of commissioned project by the Ministry of Internal Affairs and Communications.

The Japanese carmaker will continue development and study how it can be fully aligned and connected with current power systems. Working with a wide range of partners interested in both its development and sales, Nissan aims to commercialize the system by the end of this fiscal year.

Nissan believes this system will allow households to be supplied with a stable amount of electricity throughout the day and reduce the burden on the current power supply by charging and storing electricity in Nissan LEAF with electricity generated at night, when power is also cheaper and more plentiful or through sustainable methods such as solar power, and using it during high demand periods.

In addition, the system can not only supply electricity from the vehicle but also charge it back to the vehicle.